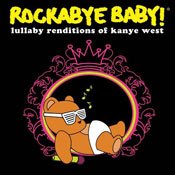 I love babies. I love the big ones, teeny ones, sweet ones and—best of all—the sleeping ones who belong to someone else. When I was growing up, my mama, grandmother, and best baby sitter ever, Mrs. Dillon, would sing me lullabies or church hymns to get me to sleep (and sometimes Daddy would strap me in his Ford truck and let the sounds of the Bogue Chitto back roads or some classic country music lull me to slumber.) Because just about all of my friends have offspring of their own, I've tried to incorporate my love of music into a cool baby gift, besides the standard diaper bag or lame box of baby wipes.

When my close friends have children, I absolutely love to give the "Rockabye Baby!" (CMH Label Group, $16.98) albums (http://www.rockabyebabymusic.com) as a gift. The Rockabye Baby! Albums take your favorite hits and turn them into soothing lullabies for your future rock stars. The series has lullaby renditions of music from The Smiths, Nirvana, The Beatles, AC/DC, U2, Bon Jovi, Bob Marley, Metallica, Depeche Mode, The Pixies, The Flaming Lips and my favorite, The Rolling Stones.

I always get mad props for giving such a rad baby gift, and it's pretty cool to hear "Smells Like Teen Spirit" as a slowed-down children's song. Visit the website to listen to your favorite bands performing rockin' lullabies.

When jam-band guitarist Jerry Garcia of The Grateful Dead and jazz/bluegrass great David Grisman became friends performing music in the '60s, I bet they never thought they would end up creating a children's album. "Not For Kids Only" (AcousticDisc, 1993, $13) is a perfect blend of traditional folk songs performed with traditional instruments (mandolin, guitar, violin) as well as infusing other instruments (Jew's Harp, violoncello, mandocello.)

When I discovered this album baby sitting my baby cousin Emma, I had to get a copy. I've now gone through two copies of this CD, and my favorite song on it is "Jenny Jenkins." Other favorites you might know and remember as a kid growing up are "There Ain't No Bugs on Me," "Hot Corn, Cold Corn" and "Freight Train." To take a listen to these tunes or order a copy, visit http://www.davidgrisman.com.

Although this children's album hit stores in 1975, its 2006 reissue through Legacy Records got a resurgence from his influx of fans in the new millennium. "The Johnny Cash Children's Album" (Columbia/Legacy, 1975, $16.95) has America's favorite singing, songwriting, gospel outlaw singing songs for the kiddos. This album features a version of Elvis Presley's "Ol' Shep," a song he and wife, June Carter Cash, wrote called "Dinosaur Song," and one he wrote for his only son titled "I Got a Boy (And His Name is John)." This is another children's album I love to play in my classroom to my babies. To purchase this for your little outlaw in training, find it on the Man in Black's website: http://www.johnnycashstore.com.

When I discovered this children's album a few years ago, I immediately purchased it, ran to the car and popped it into the CD player. I also immediately fell in love with it. "Mary Had a Little Amp: Music's Biggest Stars-Childhood's Greatest Songs" (Sony, 2004, around $25) did a great job pairing up children's songs to the artists performing them. The Dixie Chicks' version of "The Rainbow Connection" is probably the best I've heard, and Bonnie Raitt with Was (Not Was) performing a bluesy rendition of "Baby Mine" from the Disney classic "Dumbo" will have you relaxed in no time. I also love R.E.M's "We Walk," Maroon 5's "Pure Imagination" (from the movie "Willy Wonka and the Chocolate Factory") and Graham Nash's updated version of "Teach Your Children." Roseanne Cash, Madonna, and Ann and Nancy Wilson from Heart also give their voices to this album. Feel free to check this album out either online or at local retail music stores.

I know I'm leaving some great children's albums out, so please suggest any and all to me that your child enjoys hearing. Have a great week, keep the listings coming in and if you see me out and about, please say hello!