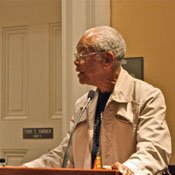 Whitwell, the Ward 1 councilman, announced the decision after it became apparent that the committee would not come to a consensus at the special meeting he called to discuss the city's deal with the company, which state NAACP president Derrick Johnson heads. Johnson was not present at the meeting because of a prior speaking engagement at Tougaloo College.

Multiple attempts by the Jackson Free Press to reach Johnson for comment for this story were unsuccessful.

The Rules Committee first selected D.L. Johnson Consultants in December to do the redistricting, which every city, county and state is required to do every 10 years after the U.S. Census to adjust election districts to account for population growth  and mobility.

At the Thursday meeting, some members of the council, including Whitwell, Ward 6 Councilman Tony Yarber and Ward 4 Councilman Frank Bluntson, expressed concerns about the company's inaction since the council hired it.

D.L. Johnson Consultants did not get a contract finalized, signed and sent to the city attorney's office until April 23, the same day the City Council discussed rescinding its hiring of the company at a special meeting.

"We are into the fifth month, almost the middle of the fifth month," Yarber said. "I think with the cloud that we have now over the city, I think it would be responsible for us to rescind and move to finding someone who can get this work done for us as soon as possible with the least amount of trouble  possible."

Whitwell said he called the May 10 meeting because of concerns over how long it took Johnson to sign a contract with the city, as well as delays in the company's redistricting jobs in other jurisdictions.

In Hinds County, the Board of Supervisors hired Johnson and approved one of his proposed maps Feb. 28, 2011. The county then sent the map to the U.S. Department of Justice, which must approve any redistricting in Mississippi due to the state's history of voter suppression.

The department's response to the map was a letter to the Board of Supervisors requesting a long list of data needed to approve the proposal.

By the June 6, 2011, board meeting, Johnson had not yet sent all the requested data to the DOJ. Election Commissioners Connie Cochran and Lelia Rhodes told the board of supervisors that redistricting approved within 90 days of an election cannot be used for that election, so last August the county used the districts drawn from the 2000 census for county primaries.

At the May 7 Board of Supervisors meeting, Board Attorney Crystal Martin told the board that the county sent the final information requested to the DOJ on Friday, May 4, more than 14 months after the board approved the proposed redistricting.

The materials and data that the DOJ require for redistricting submissions are laid out in Section 5 of the Voting Rights Act. The DOJ made the most current revisions to the law April 15, 2011. Under the act, the attorney general has 60 days to raise any objections to a plan once the DOJ submits it.

In the case of Hinds County, the AG's 60 days could not start until the county submitted all the needed information to the DOJ, who then has to review it before sending a submission to the Attorney General.

Whitwell said the public had concerns with some of Johnson's previous work with the DOJ, but Ward 3 Councilwoman LaRita Cooper-Stokes said that according to a Hinds County supervisor she knows personally--presumably her husband, Supervisor Kenneth Stokes--there is no problem between Johnson and the DOJ.

"For us to sit here today with all of this hearsay about what has not been accepted by the United States Department of Justice, with nothing in writing (and) no proof, is absurd," Cooper-Stokes said.

"If it is true that there is a problem with the Justice Department, that can surely be verified. Let's verify there's a problem."

Civil Rights Movement veteran Hollis Watkins represented D.L. Johnson Consultants at the Rules Committee meeting. He said he would not respond to allegations about the company's work in other jurisdictions, but that they are prepared and ready to move forward with redistricting for Jackson.

He also said the company knows what it needs for DOJ approval and will work to get a map approved in a timely manner.

Yarber and Bluntson held to their positions to rescind the contract after Watkins addressed the committee. They both said Thursday they supported hiring Central Mississippi Planning and Development District, of which Whitwell, Derrick Johnson and Jackson Mayor Harvey Johnson Jr. are members of the board of directors, to either work along side D.L. Johnson Consultants or to head the redistricting  effort alone.

Ward 2 Councilman Chokwe Lumumba said there may be a conflict of interest because Whitwell is on the CMPDD board. Whitwell said both he and Mayor Johnson serve on the board as representatives of the city, and they receive no material benefit from their service on the board.

Deputy City Attorney Monica Joiner said if an elected official serves on a board of directors as a representative of the city and they receive no pecuniary benefits from the organization, there is no potential ethical violation in signing contracts with that organization.

After a short presentation by CMPDD representatives Thursday, Ward 5 Councilman Charles Tillman and Lumumba, who is not a member of the Rules Committee but was present at the meeting, supported moving forward with D.L. Johnson Consultants. Cooper-Stokes left the meeting before the presentation, but supported keeping the contract with Johnson. Yarber and Bluntson supported a contract with CMPDD.

The committee had reached a stalemate, despite trying to reach a consensus, Whitwell said. A majority in the City Council would have to approve any new plans, and it was not clear that the council could reach a majority even if the Rules Committee made a decision. Trying to reach that majority could delay the process even further.

The city will keep its current agreement with D.L. Johnson Consultants, Whitwell said, with the stipulation that representatives of the company meet with each council member individually at a time and place of the council member's choosing to assure them that the company is on track with redistricting.

"Mr. Chairman, I applaud the way you (headed) this meeting," Tillman said  to Whitwell. "You tried. You really tried in good faith."

Mayor Johnson signed the contract and made the deal with D.L. Johnson Consultants official after the Thursday meeting.