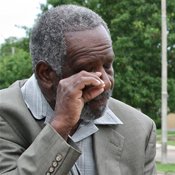 Mike Smith presented Arthur Brown (pictured) with a poem he wrote after hearing of the murder of Brown's brother, Benjamin, in May 1967.

Benjamin Brown was a 22-year-old activist in 1967 when law enforcement officers shot him once in the back and again in the back of the head during a civil-rights demonstration near the campus of Jackson State.

Last Friday, May 11 marked the 45th anniversary of the shooting, which led to Brown's death the following day. Friends and family gathered near the site of the shooting on John R. Lynch Street to commemorate Brown.

Among them was Mike Smith, a fellow civil-rights activist from California who had become friends with Brown during protests and demonstrations in Jackson. When Smith learned of Brown's death in May 1967, he immediately wrote a poem about his fallen friend. Friday, he read and presented a copy of the poem's first publication in the alternative weekly newspaper The Berkeley Bard to Arthur Brown.

Brown was energetic, outspoken and driven in his pursuit for civil rights, Smith said. He and Brown were in a jail in Jackson in March 1965 after police officers arrested them at a demonstration for voter's rights when they received news of the march from Selma to Montgomery, Ala. for equal voting rights.

"(I) could just hear Ben's voice really strongly singing We Shall Overcome, Smith said as he fought back tears. "He was the last one singing, because they were going to throw us in solitary."

No arrests have ever been made in Brown's killing. Brown's mother, Ollie Mae Brown, and his widow, Margaret Brown, filed a wrongful death suit against the state and its agents, but the state dismissed the case in 1970.

Jackson police reopened the case in 1998. On May 29, 2001, a Hinds County grand jury found that Brown's death was a result of the actions of former Jackson police captain Buddy Kane and former Mississippi Highway Patrol Officer Lloyd Jones. The grand jury concluded that Brown suffered at least two shots from Kane and Lloyd's shotguns. Both officers were deceased at the time of the findings.

"I would like to see some more clarification on the things that happened," Arthur Brown said Friday. "I think they named at least two people they said were involved in it, but all the little ins-and-outs about it, I (don't) know."

Ollie Mae Brown and Margaret Brown sued the Mississippi Department of Public Safety and the city of Jackson after the grand jury hearing. The case was settled for an undisclosed amount in 2002.

"(It's) going to always be in my heart that his life was taken," Arthur Brown said. "Even though you forgive things that have happened, memories will linger. We will always remember."

Could the poem be published in the Jackson Free Press. I would like to read it.