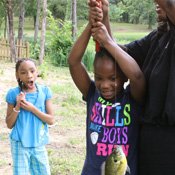 Pecan Park Elementary student Kynedi Nichols holds up the first catch of the day at the opening event of the Jackson youth fishing program in Livingston Park at the Jackson Zoo.

Pecan Park Elementary student Kynedi Nichols stole the show with the first catch of the day at the kickoff of a new youth fishing initiative in Livingston Park at the Jackson Zoo Wednesday.

Students lined the edge of Livingston Lake with cane poles as teachers and park rangers from the Mississippi Department of Wildlife, Fisheries and Parks showed them how to bait hooks and wait for the float to go under before setting the hook.

Mayor Harvey Johnson Jr. announced that the program will officially begin May 26. On weekdays once school is out and during limited hours on weekends, kids 15 and under can fish at Livingston Lake if accompanied by a parent or guardian 21 or older.

The Department of Wildlife, Fisheries and Parks, their foundation and their corporate partners will provide cane poles, tackle and bottled water for the kids, who will be allowed to take home two fish every day they participate.

"This lake once was sort of a meeting place for a lot of activities: swimming and fishing," Johnson said. "Well, we're going to bring fishing back."

A cheer came from the edge of the lake as one student got a bite while Johnson spoke, but she pulled up only an empty hook.

After the mayor's speech, Nichols pulled up a bream and held it high as the cheering teachers, rangers, mayor and Ward 5 City Councilman Charles Tillman gathered around to see the first catch of the morning.

Clark Gordin, CEO of the Mississippi Department of Wildlife, Fisheries and Parks Foundation, said the department will need help from volunteers to run the program once it starts.

"(We) provide a really wholesome activity for kids to get out of the house, maybe away from a (TV) screen and get outdoors, enjoy the sunshine, fresh air and hopefully learn how to fish," Gordin said.

AWESOME... maybe JPS will get going and start the same thing at their Environmental center. Right now you can only go out there for one weekend at the Fishing Rodeo. I remember going to the lake on Sunday afternoons and just hanging out. There were paddle boats that you could use. This was after desegregation when they would let us come out there.