Films Under the Stars 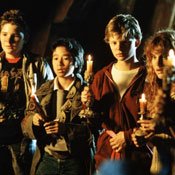 "The Goonies" is the first film of the Screen on the Green series, hosted by the Crossroads Film Society and the Mississippi Museum of Art.

Deep within the well of nostalgia lie carefree memories of families and friends packed in wood-paneled station wagons heading for an entertaining evening at the drive-in movie theater. The movie magic was not so much about sitting in the car, cramped against your brother or sister or best buddy, but rather the liberating feeling of being under the stars, seeing a funny film, laughing with friends, munching on candy and popcorn, and sipping impossibly large sugar-laden sodas.

While drive-in movie theaters have all but disappeared, the Crossroads Film Society and the Mississippi Museum of Art offer the same experience (sans vehicle) with their upcoming "Screen on the Green" series. Family and friends can kick back, relax and watch classic films a la fresco.

The Screen on the Green series begins Friday, March 30, at the Art Garden of the Mississippi Museum of Art (380 S. Lamar St., 601-960-1515) at 7 p.m. This week's movie is the 1985 cult classic "The Goonies." The film, directed by Richard Donner and scripted by Chris Columbus, revolves around a pack of kids living in the "Goon Docks," near Astoria, Ore.

The group, led by Mikey (Sean Astin before "The Lord of the Rings" trilogy fame), idolizes James Bond and other action icons, and the kids find themselves on a high-octane adventure to find treasure stolen by One-Eyed Willie, a ruthless pirate (as if there's any other kind) from the 17th century. In his child's mind, Mikey believes that the gold coins will prevent his family's move out of Oregon.

His comrades are an assortment of loud, smart and funny, and their nicknames say it all. Mouth (Corey Feldman) is the talker. Data (Jonathan Ke Quan) is the wiz kid, and Chunk (Jeff Cohen) is the chubby comic relief. The picture introduces two girls—Andrea (Kerri Green) and Stephanie (Martha Plimpton)—late in the story to provide a touch of romance. "The Goonies" hinges on fantastical flights of adventure that all ages can appreciate.

On April 24, "Driving Miss Daisy" takes center screen in the garden. Based on the Pulitzer Prize-winning play by Alfred Uhry, this 1989 film tells the story of a black man named Hoke (Morgan Freeman) who is hired as a chauffeur for Daisy, an aging and bellicose southern belle (Jessica Tandy). The film, directed by Bruce Beresford, chronicles the social changes that took place in the South between 1948 and 1973, and the friendship between Miss Daisy and Hoke that embraces those changes. Because she is Jewish and he is black, both are outsiders, and that shared status provides an unexpected point of alliance. "Driving Miss Daisy" garnered the most Oscar nominations of all films in 1989 and received top awards for Best Picture, Best Actress in a Leading Role, Best Screenplay and Best Makeup.

Screen on the Green will feature "Ferris Bueller's Day Off" May 24. This funny 1986 flick is about a teenager (Matthew Broderick) skipping high school so he can spend time with his girlfriend, Sloan (Mia Sara). Along the way, Ferris helps his best friend, Cameron (Alan Ruck), earn some self-respect. It's all played out in the concrete playground known as Chicago. Directed by John Hughes, this picture is whimsical and endearing.

On June 24, the 2009 film "(500) Days of Summer" will complete the first of, hopefully, many Screen on the Green series to come. In this romantic comedy directed by Marc Webb, Tom Hansen (Joseph Gordon-Levitt), a reclusive artist working at a greeting card company, meets a new employee, Summer Finn (Zooey Deschanel). The free-spirited Summer sweeps Tom off his introverted feet. This film is a breath of fresh air and offers witty insight on the complicated dance of dating and romance.