Running Of The Vixens 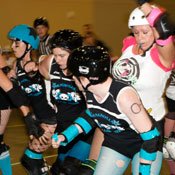 The Magnolia Roller Vixens will take their skills to the street for Zippity Doo Dah and the chirren.

If you're roaming the streets of Fondren before the start of the Zippity Doo Dah Parade, be sure to watch out for the bulls. It may not be Pamplona, exactly, but the Magnolia Roller Vixens will bring some excitement and entertainment while clearing the way before the parade starts.

For the uninitiated, the Roller Vixens are one of Jackson's roller-derby teams and have existed for about three years. As the sport's recent resurgence in popularity continues to grow, the team has increased to around 30 Vixens, who range in age from 18 to "young at heart." They also have a Junior Derby, a junior varsity squad of sorts, for girls who are too young to play in bouts (18 is the minimum for the regular league) but want to learn about the sport.

The Running of the Bulls is based on an annual event held by derby teams in other southern cities with parades, says Anna Masters, a skater with the Roller Vixens.

"Community involvement is a big part of what we do," she says. "We try to give back as much as we can ... so this was a natural extension."

It also provides an opportunity to show people what the derby is about.

"A lot of people don't know that roller derby is making a comeback and that it's different than it was in the '70s. Rather than being just for show, now there are strategies and rules, and it's a real sport. We want people to know about it not just to recruit fresh meat (the name for new players), but so they come watch our bouts and support us," Masters says.

For the Running of the Bulls, the Vixens will decorate their helmets with horns and get dressed up in derby attire. Once they are "released," they will skate through the streets to make way for the parade, swatting those in their way with foam bats.

The Jackson Rugby Football Team is joining the fun by running in front of the Vixens. The addition of the rugby team made sense because both roller derby and rugby are full-contact sports that are a bit outside of the mainstream, so they support each other, Masters says.

She first met the Roller Vixens when they came to a Jackson Rugby Football Team match—her husband plays on the team.

In addition to his support she found that the girls on the team take their time with new members and help them learn the sport. Participating in community events like the parade increases the camaraderie among members.

Look for the Roller Vixens right before the parade starts, or learn more about them at http://www.magnoliarollervixens.com. Follow them on Twitter at @magnoliarollers or find them on Facebook.

The Vixens' next bout is March 31 at the Jackson Convention Complex against the Capital Defenders.