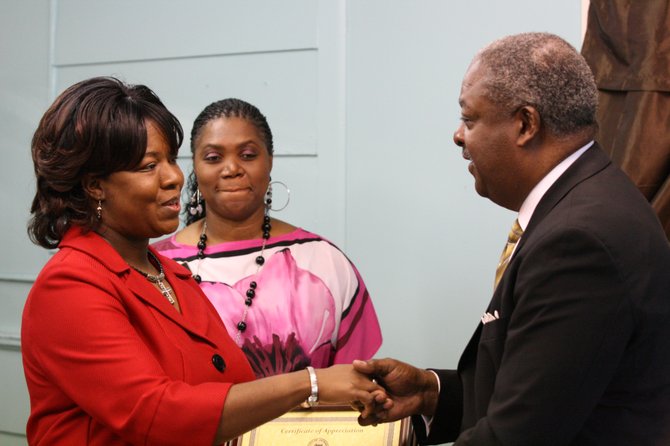 Owner Yalonda Gladney is a student at Jackson State majoring in social work. She said God gave her the vision of opening the boutique in 2010, but that she didn't feel the push to open the store until the beginning of this year. Once she started looking for distributors and a location, everything quickly fell into place.

"(God) truly poured me out blessings that I didn't have room to receive," Gladney said. "And this is where we are today. I stepped out on faith and I'm trusting Him, and I know he didn't bring me this far to leave."

Mayor Harvey Johnson Jr. presented Gladney with a certificate of appreciation at the grand opening.

"We really appreciate your confidence in the city of Jackson, and your commitment, and your courage, quite frankly," Johnson said to Gladney. "It's really a strong indication to me that people have faith in our city, but also faith that our economy is going to improve."

Beneke Magnolia Inc. recently purchased Sanderson Plumbing Products Inc. and officials announced yesterday that the company's Columbus, Miss. facility will remain in operation, a move that will result in the retention of 400 area jobs.

Sanderson Plumbing Products has built toilet seats since the company was founded as Findeisen-Kropf Manufacturing Company in Chicago in 1893. The company moved to Columbus in 1939 and has made toilet seats there ever since.

The Mississippi Development Authority provided Beneke Magnolia with a loan through the Existing Industry Loan Program to help them purchase the company. The Columbus-Lowndes Development Link, an association of business people in Columbus, also helped with the acquisition.

"I am delighted Beneke Magnolia, a locally owned company, has purchased SPPI to ensure its doors will stay open in Columbus, and its 400 employees will continue to have jobs," Jim Barksdale, interim executive director of MDA, said in a press release.

The shopping center, built in 1968, contains almost 400,000 square feet of available space and once housed 30 restaurants, shops and services, including a movie theater.

The grand opening will feature food and entertainment at the shopping center, which is located between Terry Road and Interstate-55.

Congratulations, Youlanda and thanks for being one of Jackson's new businesses. These are the kind of efforts that will keep Jackson growing. You have made the community proud! I hope your boutique carries sizes for BIG girls. LOL