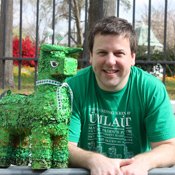 Members of the marching krewes take Mal's St. Paddy's Parade seriously: As one member of the Green Ladies puts it, "People plan pregnancies around this parade." So you know who's who, here's a little guide.

O'Tux Society: The O'Tux Society's most famous (or infamous) member is St. Paddy's Parade founder Malcolm White. Originally all male, this krewe wears tuxedo jackets and hands out green and white carnations in exchange for kisses—an idea based on the New Orleans parade tradition. Over the years, the membership has expanded to include women and the children of its members.

Krewe of Kazoo: The Krewe of Kazoo's colors are pink and green. Marching behind the O'Tuxers, they carry decorated umbrellas and parody a popular song each year with parade-themed lyrics, to which they choreograph a routine to perform in front of the judges' stand. VA Patterson is a founding member, and Gay Reynolds currently heads up the krewe. The Kazooers and the Green Ladies Krewe collaborate on a toy drive for the Blair E. Batson Children's Hospital; collection boxes are at CS's, Ole Tavern at George Street and Hal & Mal's (the stops along the way of the Marching MALfunction & Second Line Stomp) throughout parade week.

Green Ladies: Sporting their signature green satin jackets, the Green Ladies' slogan is "Showing our asses since '99." Founder Lesley McHardy started this krewe in 1999 when Malcolm White suggested that the parade needed more marching krewes. She and her friend, Ruma Haque (now deceased), each invited 10 friends to join the krewe and had jackets made, and the group was born. Their signature is throwing handmade domino necklaces customized with racy sayings (though they also make sure to have kid-friendly throws).

The Standing Krewe of Umlaut: In its seventh year, this krewe's constitution specifically prohibits its members from marching in the parade; rather, the krewe establishes camp at the corner of Capitol Street and Congress Street. Jay Losset is a founding member, but the krewe has grown exponentially and last year boasted 65 members.

Too Live Krewe: This ragtag group of Jackson Free Press staffers, readers, artists (Josh Hailey helped start it) and other misfits randomly inserts itself wherever it can find a space in the parade lineup. This year, the Too Live Krewe is walking in the Marching MALfunctions Second Line Stomp Friday night instead of the parade. It is considering a float next year. Write [e-mail missing] if you'd like to join in.