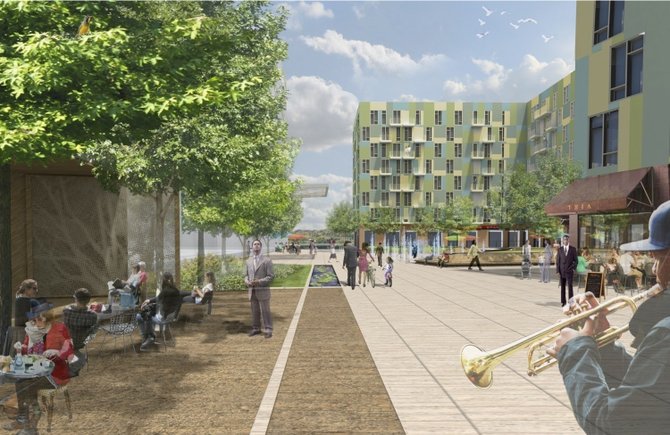 Full Spectrum NY said in the spring that it planned to break ground by the end of June on 1822 Square, a mixed-used development at the location of the Old Capitol Green. Now, the plan may be falling apart. Photo by Courtesy Full Spectrum NY

Full Spectrum NY plans to break ground by the end of June of this year on a mixed-used development at the location of the Old Capitol Green (119 N. State Street).

"We have GSA, the Metro Chamber, an architectural firm and the Islamic Museum have given us letters of interest for this (office) space," Brown said during a presentation at the Jackson Free Press.

A dozen retailers are already on board for the development, he said, including E&L Barbeque, Tony & Tina's Day Spa, Campbell's Bakery, Monte's Seafood, M Power Dance Studio and a cooperative art gallery, he said.

The automated parking garage will feature wire-guided robots that will pick up a patron's car and take it to a secure spot in the garage. Drivers will be able to drop off their car in the lobby, and the robots will bring it back to them when they are ready to pick it up.

Chris Mulvihill, president of automated parking manufacturer Boomerang Systems, said via speaker phone that the automated system will reduce the garage's carbon usage almost to zero, because no lights are needed inside and solar energy will help power the garage. Also, the system eliminates the threat of rape, robbery and other crime in the garage, because no people will actually enter the garage.

In January, the Jackson Redevelopment Authority approved an urban renewal bond worth up to $4 million for the construction of the garage.

The entire development has been designed to reduce carbon footprint and provide green spaces in Jackson, Brown said.

"There is a roof garden that goes over the retail from the second floor (of residential space)," Brown said. "That's a real garden that you can really plant real food on."

The name of the development, 1822 Square combines the year of Jackson's incorporation and the original town-square layout of the city.

"The original plan for Jackson was a plan that was sort of like the Savannah (Ga.) plan. There was supposed to be all these communities built around these public squares," Brown said. Most of the squares never came to fruition, though, and even fewer remain today. Brown said the goal with 1822 Square is to create the public realm the squares were meant to build in Jackson.

Brown said the parking garage will take six to nine months to build. Once developers break ground this summer, the entire project is expected to take about 24 months to finish.

I'm glad to see this finally start to come to fruition. With this and Farish Street possibly about to kick-start, downtown will be unrecognizable within the next five to ten years.