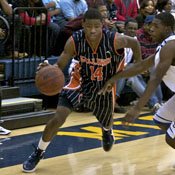 Malik Newman, left, plays against Kemper County at the Rumble in the South at Mississippi College on Jan. 21.

The Callaway High School boys' basketball team is going for their third championship in four years this Saturday. The team plays at 2:45 p.m. against Wayne County for the 5A Boys title.

All championship games will be played at the Mississippi Coliseum today through Saturday. Tickets are $10 and can be purchased at the Coliseum box office.

If Callaway is going to win the title, a freshman sensation will lead them. Malik Newman is considered one of the best players in the country according to various scouting websites.

Hoop Scoop has named Newman the best player in the country for the class of 2015. This season, Newman has averaged 23.3 points per game. He is adding nearly five rebounds with nearly two steals every contest.

Newman is already 6 feet 2 inches tall and weighs 175 pounds. The scary thing is he will keep growing and maturing.

Newman's great talent is only matched by his great work ethic. He joins a long list of great Jackson basketball players in the capital city. Only time will tell if Newman will outrank past great players.

Fortunately, Callaway does not have to rely on Newman alone. This Chargers team has a strong core of good players. Terron Gilmore averages 10.8 points and nearly six rebounds per game. TreShawn Bolden chips in 9.2 points and averages just over six rebounds an outing.

Callaway is not the only metro-area school playing for a championship this weekend.

The Jim Hill boys' basketball team plays Tupelo at 8:30 p.m. Saturday for the 6A Boy's title.

On the ladies' side of the bracket, the Forest Hill girls' basketball team will face Hattiesburg at 7 p.m. on Saturday for the 6A Girls title.