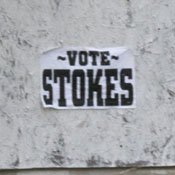 A campaign sign reads "Vote Stokes" on the front of a boarded-up house in Jackson's Ward 3. LaRita Cooper-Stokes will be sworn in as Ward 3 Councilwoman today at 2 p.m.

While today marks the beginning of LaRita Cooper-Stokes' term on the City Council, it might not mean the end of the election.

"I'm going to contest the entire election because it was too much fraud," Jackson said Thursday.

This morning Jackson said she would file the paperwork today, but declined further comment, citing the advice of her legal counsel.

Cooper-Stokes' swearing-in as Ward 3 councilwoman is today at 2 p.m. in City Hall. However, if the Circuit Court rules in favor of Jackson's challenge, Ward 3 could have another election.

JFP attempted to reach Cooper-Stokes at her home Thursday without success.

Kenneth Stokes vacated the Ward 3 seat when he was elected to the Hinds County Board of Supervisors last year. Stokes was not present at his scheduled swearing-in for the supervisor's seat on Dec. 29.

That photo and caption says a lot, doesn't it?

Think of the money they will save on campaign signs! Just keep recycling the same "Vote STOKES" signs regardless of the race!