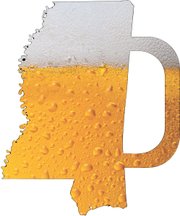 “I’d kill everyone in this room for one drop of sweet, sweet beer.” —Homer Simpson

Mississippi was the last state in the United States to fully allow the sale of alcohol. The state repealed prohibition in 1966, 46 years after the U.S. nullified it, and then only in a confusing patchwork of “wet” and “dry” counties and cities. But “intoxicating liquors” had been illegal in Mississippi since 1907, 13 years before the Volstead Act was fully ratified. Because of this and other factors, including the enormous influence of teetotaling church communities, Mississippi never really developed a beer-brewing history. A few local breweries operated along the river and on the Coast, but for the most part, the beers consumed in Mississippi came into the state by truck, rail and barge.

The “golden age” of American breweries lasted from the 1880s to 1910. During the first part of this gilded time, Mississippi was still in shambles, putting itself back together after the Civil War and Reconstruction. By the end of the brewery boom, Mississippi was officially dry. So, when Lazy Magnolia Brewing Company sold its first keg a century after the golden age, it didn’t signify the resurgence of brewing in Mississippi as much as the birth of the industry here.

What Mississippi missed out on during the golden age was a time when the number of American breweries peaked at more than 3,000, brought on by the huge influx of European immigrants setting up local breweries and making small-batch beers in the style of their homelands. Over the next few decades, with the advent of refrigeration and the proliferation of railroad lines, the largest breweries either purchased the smaller ones to meet demand or simply outperformed them in such a way that made it difficult or impossible for the little guys to compete with the monsters that became Anheuser-Bush, Miller, Schlitz and Coors.

The nail in the small brewer’s coffin came in January of 1919 with the passage of prohibition. Only the biggest survived by turning their breweries into factories and making “near beer,” or beer with low to no alcohol. However, craft beer has experienced a resurgence in recent decades, and many say we are now in our second golden age with more than 1,500 breweries operating in the United States. Sure, the brewing behemoths still have the bulk of the business, but all of the growth in the industry is coming from the little guys making impressive beer. Now, at last, Mississippi gets to play along with the rest of the yard.

Top 20 Beer-consuming states in the USA

The brewers at Lazy Magnolia, founded in 2005, feared that the Mississippi customers might not appreciate the more intense “craft” beers that they wanted to make. With this in mind, they produced Reb Ale (now known as Deep South Pale Ale), a beer that was as close to a traditional American lager as they could brew, and planned on it being their bread-and-butter product—the one that would allow them to sell a little bit of the more complex and intense “good stuff.” When the “good stuff” started outselling the “light stuff,” they were pleasantly surprised and became cautiously optimistic that change was on the wind.

Fast forward seven years, and those seeds of change sown by a couple who started brewing as a kitchen-counter hobby grew and blossomed into a full-blown craft-beer movement that swept through bars and restaurants and, of all places, the Mississippi State Capitol. A handful of self-proclaimed “beer geeks” and “hop heads,” operating under the banner of Raise Your Pints, took on the political who’s who in the shining buckle of the Bible Belt and accomplished the unthinkable.

In just a couple of sessions, they convinced the old lions of the Mississippi legislature to pass a law increasing the alcohol content of beer and allowing for the sale of more beer.

Hang around any local bar that pours craft beer, and you’ll hear the buzz. There’s an electric anticipation in the air, and the magic date of July 1 on everyone’s lips. That is the day when Mississippi will finally be free from the Draconian cap of 5 percent alcohol by weight, or ABW, and higher-gravity beers will be on the store shelves.

How old is beer?

“From the time men first domesticated grains about 8000 B.C. they might have brewed beer and inhabitants of various parts of the world certainly were brewing by 3500 B.C. Soon it was the most popular alcoholic beverage in Mesopotamia—beer idioms became part of language and the government took to taxing beer consumption—a position it has enjoyed in most of the world ever since.”

Everyone has favorites they’re hoping to see on tap—my two are Andygator by Abita Brewing and De Koninck Triple d’Anvers. Hop heads are hoarding “big beers” and holding parties that will commence at the stroke of midnight with the synchronized bottle-top-popping of their favorite elixirs. Beer tastings are scheduled and full-blown celebrations, like our “Underground USA” at Underground 119, are set to go. It’ll be like a hipster New Year’s Eve right in the middle of our long hot summer.