Life Without Parole for Kids Ruled Cruel and Unusual

U.S. Supreme Court on Life Without Parole for Kids 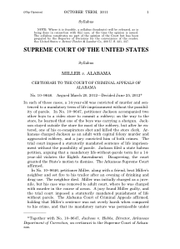 Before a person under the age 18 can be given a life sentence with no hope of parole, judges must take the defendant's age and the nature of their crime into consideration.

In a 5-4 decision, the U.S. Supreme Court ruled Monday that mandatory sentences for murderers that included people under 18 was tantamount to cruel and unusual punishment.

“We therefore hold that mandatory life without parole for those under age of 18 at the time of their crime violates the 8th Amendment’s prohibition on cruel and unusual punishments,” wrote Sotomayer for the majority.

I'm glad to see this. I never understood how a minor isn't old enough to vote, drink, gamble, sign contracts or any other thing that requires you to be 18 or older, but is old enough to be tried as an adult in the legal system.