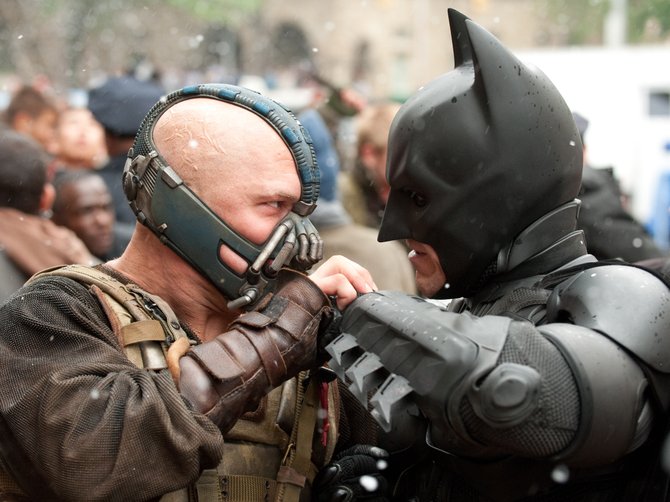 "The Dark Knight Rises," the final installment in Christopher Nolan's Gotham trilogy, should have been the cherry on top of a summer sundae of blockbusters. Instead, a tragic killing spree during a midnight premiere in Colorado shrouds the movie in pain and grief. Only the most loyal fans gathered together with family and friends to attend late-night screenings, and this review honors those fans, some of whom died or were injured by a murderer preying on their trust for a genial event.

Nolan pushes the envelope of chaos and indulges us in the sinister nighttime of Gotham City in "The Dark Knight Rises." The camera moves swiftly, swerving the angles, diving deep into the sewers, depicting a harsh and brutal cityscape where crime festers and mayhem unfolds. Billionaire Bruce Wayne (Christian Bale), however, doesn't care. Since Rachel Dawes' death eight years ago, Bruce has lost his soul to indifference. The public has smeared his alter ego, Batman, as Harvey Dent's killer, and the public remains ignorant of the truth—that is, that Batman sacrificed his reputation to avoid tarnishing Dent's.

What's left for Batman except perhaps death? He has no family, no friends, no empire, no hope. Yet, there's Alfred (Michael Caine), the ever-loyal servant who has been by Bruce's side since he was a wailing infant. Alfred believes in Batman, and Caine's masterful performance sparks the movie's strongest emotional pull. The scenes between Caine and Bale are unbelievably complex, and at times, you will be swept into something more tantalizing than basic good versus epic evil.

As Bruce hides in the shadows of Wayne Manor, a sleek cat burglar (Anne Hathaway) steals his mother's pearls. Meanwhile, a new masked figure named Bane (Tom Hardy) launches an army of evil underlings from the sewers, while Bruce ruminates on life and death. "No one cared who I was until I put on the mask," Bane says. The mask hides and protects and transforms the wearer.

When Dent's legacy crumbles to Bane and his thugs, the Gotham Police Department is ill equipped to respond. Commissioner Gordon (Gary Oldman) fist fights with Bane, but his heroism nearly gets him killed. Bruce visits his convalescing friend in the hospital. Gordon lays it out: "We were in this together, and then you were gone. Now this evil ... rises. The Batman has to come back."

"What if he doesn't exist anymore?" Asks Bruce.

It begs the question: Who is Batman? He's not a superhero. He doesn't pander to patriotic colors. He has no special gifts. Rather, Batman's an ordinary man with money and rage. His anger places him on the flip side of the same coin as the villains he seeks to stop.

In short, Batman is the Dirty Harry of comic book heroes; he is afraid of no one and bows to no man. When suited up and masked, Batman's soft-spoken voice sounds a lot like Clint Eastwood.

But unlike Dirty Harry, Batman only uses his fists—and an occasional vehicle of mass destruction created by Mr. Fox (Morgan Freeman).

Not all people in Gotham City believe Batman is a lost cause. Officer Blake (Joseph Gordon-Levitt), who grew up in the local orphanage, maintains his faith in the caped crusader, as does a rich young heiress (Marion Cotillard) who financially supports Wayne Enterprises during its troubled times. Mr. Fox hasn't been idle, either: He's stocked up on an impressive warehouse of armaments knowing that Batman would return.

As suspense craftsmanship, "The Dark Knight Rises" starts slowly, exploring Batman's existential crisis, and builds to a spectacular climax, which cannot be discussed in any fashion for fear of ruining a cinematic experience. It would be stupid to deny that "The Dark Knight Rises," which was directed by Nolan and co-written by Nolan and his younger brother Jonathan, is a stunningly well-made film that will turn on an audience. But it does not reach the heights of near perfection of 2008's "The Dark Knight," which combined chaos, brutality and humor with a hearty performance from Heath Ledger. Villain Bane lacks the carefree spirit of the Joker. You can only imagine the Joker asking Bane, "Why so serious?"

The grimness of "The Dark Knight Rises" is essential to its hold on us. Batman comes alive in the dark. He works alone, but is not afraid to ask for help.

Bale the actor and his character merge into a seamless performance where actor and character are one. Anne Hathaway demonstrates that she possesses the magic "it" factor. She lights up the film's darkest hour. The rest of the cast layers the story with rich details and nuanced performances. This film is high gothic drama and a most satisfying end to the arguably best superhero trilogy made.