Songs from a DIY Donkey 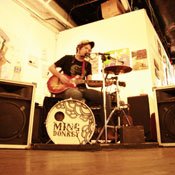 Jayson Triplett performs as Ming Donkey One Man Band. His roots include a stint as a punk rocker.

Never in a hurry and always full of character, the Ming Donkey One Man Band mixes roots-music styles with a street artist's sensibility. Ming Donkey is a persona of Starkville musician and visual artist Jayson Triplett. He performs with a "less is best" approach, accompanying his guitar playing and singing with rhythm from drums and cymbals he plays with his feet.

Triplett has performed for 20 years, but started in a different musical sphere from Ming Donkey. A native of Louisville, Miss., Triplett got involved with the punk-rock music scene in Starkville while a student at Mississippi State in the early '90s. Starkville's relatively isolated location required Triplett and other musicians to be self-starters. "There were enough like-minded people that we helped each other out," he says.

The musicians would make their own recordings and stage house shows, often hosting upcoming touring bands that were willing to make the detour to Starkville. Jackson attorney and artist David McCarty was a MSU student then and attended many of these shows, including one of Triplett's early band's especially intense performance.

"They played so fast and so loud, they kept blowing the circuit breaker and the power kept kicking off in the house," McCarty says. "It was awesome."

"The songs were real simple, with very fast playing," Triplett says. A trio that paired Triplett's youthful voice with the near chipmunk pitched singing of bassist Amy Frisby, the Grumpies played speedy punk anthems, many of them clocking in at less than two minutes in length.

The group learned on the local level, releasing records and touring the United States and Canada. "We were very much into the 'do-it-yourself' mentality," Triplett says. "We set up our own shows. It was very economical. We toured in a car, which influenced our sound."

The Grumpies wound down in 2000, and Triplett moved to New Orleans, where he played with the Riverbaggers, a band that explored roots-music styles. He also began experimenting with a more stripped-down approach, playing duo gigs with a bass player. Wanting to expand the sound at one of these shows, Triplett threw in some rhythm.

"I had some drums in the back of my van," he says. "And so I pulled out the kick drum and hi-hat. I played along, and it gave a little bit more of a bounce to it."

Triplett continued on with the duo setting, leaving New Orleans for a brief stint in Oxford before returning to Starkville in 2002. He studied the work of southern traditional musicians and visual artists. He saw an ethic of "rural resourcefulness" in the work of self-taught visual artists like H.D. Dennis (creator of Margaret's Grocery in Vicksburg) that resonated strongly with his own punk efforts. He continued stripping down his music to working as a solo artist.

"You take on a room by yourself, so there is a little bit of a challenge to it," Triplett says. "It's all about resourcefulness and economy."

In the past few years, Triplett has performed as Ming Donkey, making regular stops in Jackson. He released a vinyl 45 in 2010. Reviews made connections between Ming Donkey and Mississippi blues, which Triplett appreciated, but rejects.

"I don't claim to be a blues artist," he says. "I prefer the category of DIY (do it yourself)." Keeping up practices he learned in punk rock, Triplett created the artwork for the single and screenprinted the covers.

McCarty has continued to follow Triplett's work. He enjoys the music, but notes the strong visual element of Triplett's show.

"It's fun just watching all the pieces jump around," McCarty says. "It's like going to the fair. There's some cranking, there's some moving around, there's feet going up and down, hands are flailing around. It's a really good show."