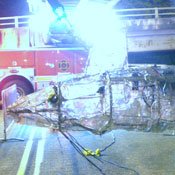 It's no secret that Jackson knows how to throw a party—after all, we're the city that throws the Mal's St. Paddy's Parade. New Year's Eve is no exception. In fact, New Year's Eve could be considered training for St. Paddy's, now that I think about it.

We had plenty of options of New Year's festivities from which to choose this year. My choice was to stay in my neighborhood downtown for dinner at Parlor Market (115 W. Capitol Street, 601-360-0090) followed by celebration at Hal & Mal's 14th Annual Krystal Ball, capped off with the Catfish Drop at midnight. The Krystal Ball is always a hot ticket (you have to get an invitation from a host to get in). For the past few years, I've been one of the hosts for the party, and I look forward to decorating with the great Hal & Mal's staff and the other hosts and distributing invitations to friends.

This year's Krystal Ball theme was "All that Glitters is Gold." As you know, I love few things more than embracing a theme. Having procured a champagne and gold-hued dress, I decided that my face needed to be golden, too.

I enlisted makeup artist Dustin King to make that happen. (You can find Dustin at Smoak Salon in Fondren's Duling School, 622 Duling Ave., 601-982-5313.) When he finished, Dustin proclaimed: "You look like you dipped your eyelids in champagne," and I knew it was perfect before I even looked.

With makeup shimmering and my dress donned, it was time to eat. For New Year's, the team at Parlor Market created a special multi-course tasting menu, offered with wine pairings. After toasting with a kir royale (in my opinion, one of the best ways to start off), it was a perfect setting in which to enjoy great company and start a night of celebration, and as always, the service was fantastic and the food sublime.

And then celebrate we did. The rooms at Hal & Mal's filled with friends old and new dancing to tunes spun by Toni from DJ Fast Eddie's company and live music by the Time to Move Band. There even may have been some karaoke. And because it's not a party without some fancy lighting, there was shadow dancing set up in the big room for those wanting to channel their inner disco queen. (For the record, I did not.)

At all New Year's Eve parties, the high point of the night is the countdown to midnight, but this year brought a relatively new tradition to new heights, quite literally. For the prior two years, party organizers made what I can only describe as a giant papier-mâché catfish and dropped it from a pole outside the restaurant at midnight—a sort of Mississippi spin on Times Square's ball drop.

This year, Roy Adkins and Jerri Sherer of Light + Glass Studio (523 Commerce St., 601-942-7285) and the folks from Davaine Lighting (141 McTyere Ave., 601-944-9934) took it to another level. Light + Glass created a 6-foot-long glass catfish, and the lighting folks fitted its belly with strobe lights. The Jackson Fire Department (and their giant crane) lifted it 80 feet in the air above downtown and as midnight approached 'Sippi the Catfish lit up the sky and dropped toward the crowd to ring in 2012.

It was nothing short of awesome.

I hope you each celebrated the start to your new year with family, friends, or whoever makes you happy, in a place that you love. I certainly did. The whole evening perfectly reflected what I think makes Jackson work—good people, coming together, making great things happen. Here's to a happy (and fashionable) year!