We All Loved Her | Jackson Free Press | Jackson, MS

We All Loved Her 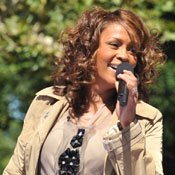 Whitney Houston influenced a generation of girls with her style and voice.

In the last couple of months, the music industry has taken quite a hit when it comes to obituaries. Hubert Smith, Howlin Wolf's guitarist, passed. We lost rapper Heavy D not too long ago, as well as Jimmy Castor, an American funk R&B saxophonist, and "Soul Train" emcee Don Cornelius. (I'm telling you, at my house growing up, we knew Saturday cartoons were over once we heard the "Soul Train" theme song.)

As if to add salt to the wound, the Lord called my beloved Etta James and Dobie Gray home. ("Drift Away" is one of my all-time favorite songs, as well as "Tell Mama" by Ms. James.) Amy Winehouse left us all too soon, as did Dick Kniss (Peter, Paul and Mary's bassist), the legendary Johnny Otis and heavy-metal band Riot's Mark Reale.

When I was growing up in a small, rural town, we had three types of music—country, western and gospel. Anything that strayed from that was few and far between. But even Whitney seemed to make her way down Interstate 55 to my house, and I just adored her from the very beginning. I mean, we all remember cute, fresh-faced, Seventeen magazine Whitney, right?

The world couldn't get enough of her back in the 1980s when she made her debut. And that voice of hers—when she opened her mouth to hit the first note, everyone knew she would make it big.

Growing up, I wanted to be Whitney Houston. She seemed to have it all—looks, talent, radiance—all the things that I wanted to be when I grew up. Hell, I still want those things.

I remember bringing my Whitney Houston tapes to school and was chastised for listening to that "n****r music." But I didn't care. I loved Whitney. She influenced all young ladies of all colors with her music and style, and most definitely some gay men. What artists around now can you say that about?

With all the media hoopla, rumors, and speculation surrounding Houston's death, it saddens me that so many fans and non-fans forget her legacy as a singer and entertainer, but never as much as when I read that Westboro Baptist Church was planning a protest at her funeral.

No matter what she did—whether it was winning a multitude of Grammys, hooking up with New Edition bad boy Bobby Brown or showing signs of erratic behavior, she still kept her fan base. And we all still loved her, for the most part. As "The Queen of Soul" Aretha Franklin said, "You can't define a person on one aspect of their character."

We shouldn't judge Houston for her past or her past mistakes. We should remember her—and the many others who died this year—for what they brought to the table. Houston had the voice that brought down the house, even during her "rough time." Record producer Clive Davis worked for years to revive Houston's music career, as well as other veteran musicians, but sadly, she never got to make her comeback.

To Miss Houston, let me just say "thank you" for being such an awesome entertainer. You were feisty, talented, beautiful, unpredictable and most definitely unforgettable. I know you have made a great addition to heaven's angel band.