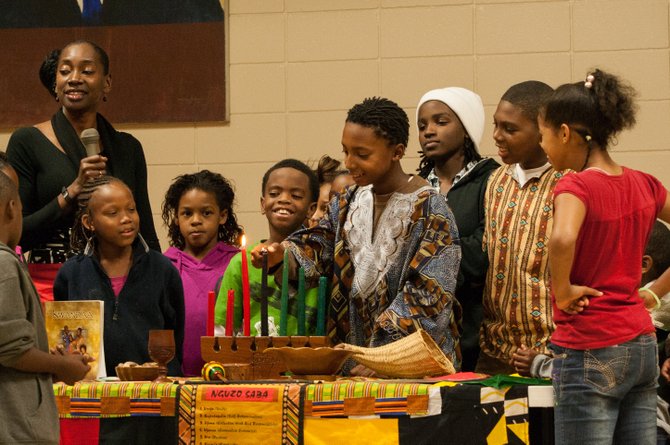 Drumbeats filled the cold air in the parking lot of the Medgar Evers Community Center Thursday night. Inside, Jacksonians celebrated Kujichagulia, the Kwanzaa day of self-determination.

Dec. 27 marks day two of the seven-day celebration of African heritage. Citizens and community leaders gathered at the community center on Edwards Avenue for a night of music, poetry, food, family, friends and culture.

Tables topped with books by black leaders from the era of slavery to today, T-shirts with maps of Africa printed on the front and magazines with iconic figures such as Malcolm X on their cover, all of which were for sale, lined the wall to the right of the entrance to the community center. Above the tables, signs hung on the wall reading, "For those who begin their history with enslavement, everything else seems like progress" and "How can you truly be free with the enemy as your deity?"

Participants sat in chairs for the opening festivities. Tables topped with red cloth filled the middle of the room, ready for the meal on the far end of the gymnasium that organizers prepared. In front of those tables, a podium and a smaller table topped with green and red Kwanzaa candles, books, musical instruments and garments served as the celebration's centerpiece.

The festivities started with an introduction by the night's co-host, lawyer and Ward 7 City Council candidate June Hardwick.

Kwanzaa organizers then paid homage to leaders of African heritage with the tradition of libations--pouring water onto earth in honor of the dead. As participants called out names such as Malcolm X, Medgar Evers, Michael Jackson and Martin Luther King Jr., others responded with the word "Ashe," which means "so shall it be," and elders poured water in a flowerpot.

After a prayer for grace, mercy and blessing, drummers filled the gymnasium once again with traditional African music. One participant, a middle-aged African American woman, got up and moved to the front of the room, where she danced to the beat for a few minutes, before returning to a seat on the bleachers in the back of the room.

Following the music, a few participants, including Hardwick, shared poems that recounted the struggle of Africans in America and their self-determination that has brought them to where they are today.

All the children at the celebration then gathered around the table at the front for the candle lighting ceremony. As one child lit two candles, one for that night and one for the previous night, they discussed the principle of Kujichagulia, or self-determination.

The night's keynote speaker was Ward 2 City Councilman Chokwe Lumumba. He pointed out that in some cities in the world, communities cannot gather to celebrate Kwanzaa, and Jacksonians should be thankful for that right.

"You can't love everybody, until you love yourself," Lumumba said, attributing the quote to Malcolm X.

Self-determination helped bring African Americans out of slavery, Lumumba said, but slavery itself was only a symptom of a bigger problem that still exists today.

"The problem is that we are not doing what we need to do, to make the decision that we need to make in order to run our own communities," Lumumba said. "The people must decide, educate, motivate (and) organize, because it's not just my responsibility because you elected me to the City Council. It's all of our responsibility."

Before leaving the podium, Lumumba took the opportunity to do a little campaigning for Hardwick and for his own run at mayor in the 2013 election.

The Kwanzaa celebration at the Medgar Evers Community Center will continue through Jan. 1, beginning at 6 p.m. every night. Each night's festivities will focus on a different principle of Kwanzaa: Ujima (collective work and responsibility), Ujamaa (cooperative economics), Nia (purpose), Kuumba (creativity) and culminating with the celebration of Imani (faith) Jan. 1.