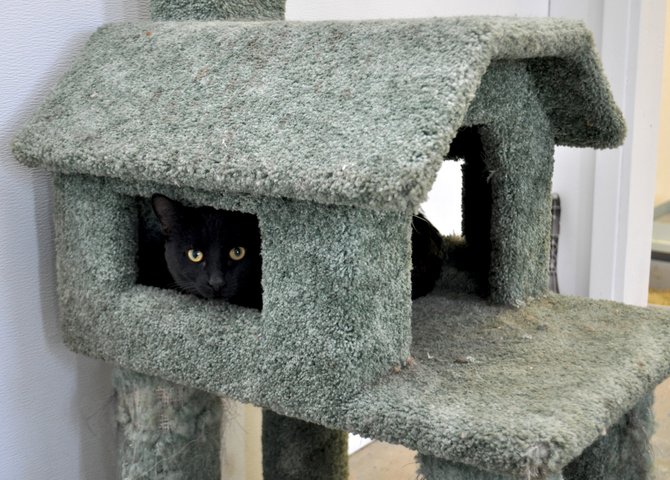 Elizabeth "Pippa" Jackson and the Animal Rescue Fund continue to fight for homeless animals, despite opposition in both Rankin and Hinds counties. Photo by Trip Burns.

The Animal Rescue Fund has moved into its new home on Mayes Street.

The Miriam Weems Animal Kennel is a no-kill animal shelter now located in a blue metal building in a north-central Jackson industrial park. Just beyond the reception desk are temporary holding pens made of chain-link fencing where ARF is housing dogs until workers and volunteers finish building the rest of the permanent pens.

Rows of those pens already fill a large-enough portion of the former factory in north Jackson that first-time visitors could get lost among them. Cinderblock makes up three walls of the pens, while the fourth is made of metal fencing and a gate.

Beyond the dog pens are two large rooms for cats, one for adults and another for kittens. Shelves lined with bed mats sit against one wall of the cats' rooms, while climbing posts and other toys line the other walls.

This is ARF's new home, made necessary because some of its former neighbors in rural Rankin County didn't want the kennel there.

ARF, under direction of founder and executive director Elizabeth "Pippa" Jackson, first faced opposition in January, when neighbors of ARF's Pelahatchie home began complaining about the noise coming from the kennel. ARF's opposition soon became serious, with the Board of Supervisors in Rankin County considering an ordinance that could run ARF out of the county.

The board passed an ordinance Feb. 15 that requires all animal shelters to house animals in a "fully enclosed, insulated, sound proofed, heated and cooled structure." It also limited the number of adult dogs that could be outside at any one time to 15, and put regulations on air quality, moisture control, sound proofing and the size of individual housing units in the shelters.

The new ordinance meant ARF had to either make major improvements to its facility on Holly Bush Road, which the organization could not afford, or find a new home outside Rankin County.

"When it came down to how much money we would have to spend (in Rankin County) to build a new building--and (the location) is a long, long way out there, you've got to go out there to adopt a dog or a cat or to volunteer--we just decided that the best choice for spending our donated money was to move closer (to the city), where it's easier access for everyone," Jackson told the Jackson Free Press.

Jackson, who doesn't draw a salary from ARF, wouldn't give up on the animals. So ARF began looking for a building in Jackson that fit its needs and was located in a commercial zone.

ARF found a new location for the kennel on West Mayes Street. The property had plenty of land for the kennel's 250-plus dogs and a few-dozen cats, multiple dog runs and a good facility with concrete floors and metal walls. Located between a construction company and a large, empty field, and across the street from brick and stockyards, the building sits near the western border of a commercially zoned industrial park. The location seemed like a perfect match, so ARF bought it.

On the other side of the western border, though, about 500 feet west of the once-desolate property, is a residential neighborhood.

In November, before ARF had even moved animals into the facility, the organization faced opposition from citizens once again. Several residents, led by Ward 3 Councilwoman LaRita Cooper-Stokes and Zoning Board member Jimmie Robinson, made headlines when they protested outside the Mayes Street location Nov. 15.

Robinson said he spoke to Jackson when he heard about ARF possibly moving into the former factory, and claims Jackson told him that she wasn't going to move the kennel to Mayes Street. So when he saw Jackson and other volunteers cleaning up the building, he went to the property to ask Jackson about ARF moving in. Things got ugly, Robinson said.

"(Jackson) had this big dog that was trying to get me," he said. "She said: 'If you don't get off this property, I'll turn this dog loose on you.'"

Best-selling author and Sweet Potato Queen Jill Conner Browne was there that day, and she disputes Robinson's account. Browne walked out of the building just after Robinson arrived. He walked up to Jackson and, though Browne couldn't hear him, she could see he was gesturing wildly. Once she got closer, Browne said she heard Jackson say only one thing.

"All (Jackson) said, and she said it over and over, was: 'I hear you. I understand your concerns,'" Browne told the JFP.

Despite the protests, ARF completed its move into the facility Dec. 2. Browne likes to see citizens who are concerned about their neighborhood, but said ARF will be an asset to Mayes Street.

"They have already employed eight people from the neighborhood," Browne said. "They were unemployed, and now they can walk to work."

In addition to rescuing stray animals, ARF offers boarding for military personnel while they are away from home on duty, and also provides therapy dogs to schools to assist children with learning disabilities. Jackson said studies have shown that children who fear reading out loud in front of people can learn to become more comfortable reading out loud by reading to an animal.

"We'll be doing therapy dog and therapy cat training to have our animal available for people who want to adopt," Jackson said.

Thank you JFP for this story. ARF/MS has been saving the lives of hundreds of abused, neglected and unwanted animals since Katrina. Elizabeth(Pippa) Jackson has the welfare of the animals as her guiding principle and has worked (along with volunteers and the ARF Board members) tirelessly to build the Mayes Street property to be a safe haven for animals no one wants. Not only that, work never ceases to find these animals homes--real, loving and permanent. When Pippa speaks of working with the community to hire from within, she means it and has done so. When she speaks of a training facility for therapy dogs that can live useful, productive and meaningful lives while contributing to others, she means it. When she offers boarding for the pets of our women and men in uniform who may otherwise have to relinquish their pets, she means it. Our focus should be on how to unite this community behind these efforts and work just as tirelessly to prevent the cruelty, abuse and the hundreds of unwanted puppies (who turn into street animals who are terrified and starving). It is days like this--bitterly cold--the the thought of an animal chained without shelter or food (and believe me, we have an abundance of those) is abominable; ARF MS is part of the solution and not part of the problem.

Amen! It is both sickening and saddening to see people "protesting" something that benefits our communities and our animal friends. I hope that ARF's presence in Jackson will help to inspire a greater community love for animals and put us on a more progressive track.