Mayor, Council Square Off Over Contract 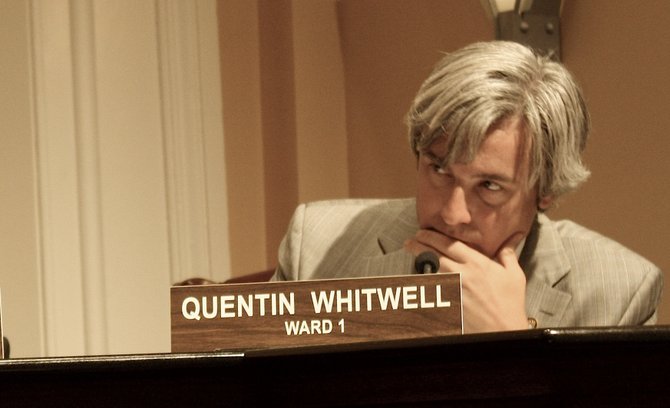 Quentin Whitwell, Jackson City Council chairman of the economic-development committee, said the committee refuses to approve the mayor's financial advisory committee for a $90 million project until the mayor signs a contract. Photo by Jacob Fuller.

A $90 million water project is on the shelf while the mayor and the city's economic-development committee refuses to come to an agreement on the timeliness of the contract with project leader Siemens Corp.

The project includes Siemens and subcontractors installing new, digital water meters across the city, installing a new water bill-tracking and payment system, making improvements to the water-treatment plant, putting in some new sewer lines and training city employees to operate the new systems. Siemens has guaranteed the city that the project will pay for itself in new revenue and cost savings to the city.

The economic-development committee, under the chairmanship of Ward 1 Councilman Quentin Whitwell, tabled a vote at a Dec. 3 meeting to approve the mayor-appointed financial advisory committee for the project, which will be the most expensive of its kind that the city has ever undertaken.

Whitwell and Ward 4 Councilman Frank Bluntson, who is running for mayor, said they did not want to approve the financial team because they didn't like that Mayor Harvey Johnson Jr. has not yet signed a contract with Siemens, a deal the council approved Oct. 16.

"(The council is) frustrated by the fact that the mayor apparently has a difficult time actually pulling the trigger on projects that he knows are important for the city," Whitwell told the Jackson Free Press. "They are ready to see some action."

Whitwell said the council feels disrespected and fears the mayor was looking for pre-approval of the Siemens deal in October so that he could negotiate whatever he wanted after the approval.

Johnson said the city has had to work out specifics and sign a confidentiality agreement with Siemens before signing a contract.

"The council authorized signature of the contract, but it was not until after that time that we were able to get information from Siemens as to some of the technical aspects and some of the fine tuning we thought that we needed to do," Johnson said. "It's not like it's at a standstill."

The financial advisory team contract that the committee refused to approve includes $170,000 to Baker Donelson and Anthony Simon for bond counsel, $125,000 to Malachi Financial Products for financial advice, and $100,000 to the Begley Law Firm and Betty A. Mallett for underwriting the bonds.

Mayor Johnson disagrees. He said the vast sum of money and many players in the contract requires experts to sort out.

"Quite frankly, we need that team to help us look at the document," Johnson told the JFP. "Once we sign a contract, the contract is signed. (The financial team) may have some questions that would be germane to the bond holders or potential bond holders."

Ward 2 Councilman Chokwe Lumumba proposed an order for today's regular council meeting that reserves the council's right to approve all final terms of the energy performance contract with Siemens. The order failed in a 3-4 vote this morning.

Lumumba, who is also running for mayor, said this project has the potential to have a positive economic impact on the city. His concern is that the administration, in the name of cost-cutting, will negotiate out some of the smaller subcontractors that Siemens wants to hire. While Lumumba doesn't want the project to cost the city more than it has to, he wants to see cost-cutting start at the top, so that smaller, local contractors can get a piece of the $90 million pie.

"I'm concerned that the slowness in approving the contract is designed to eliminate other people, who I believe Siemens has included in this economic expansion activity, people who don't generally get these city contracts," Lumumba said. "What is possible is that once (the administration) gets the people they favor signed up, then (they) put pressure on Siemens to reduce the price of the contract, which, at the same time, could be concealed as pressure for them to eliminate some of the other team members."

Council at Odds Over Helmet Law

Lumumba sponsored a city ordinance that would make it illegal for anyone to ride a bicycle in the city without a helmet, but at least two council members don't like the idea.

Whitwell and Council President Tony Yarber of Ward 6 both said at the City Council work session Dec. 10 that they did not like the ordinance. Their biggest concern was how the city could enforce the ordinance, and who would receive the fines in the cases of children caught not wearing a helmet.

The ordinance would set up a system of fines between $25 and $75 for anyone seen riding a bike without a helmet. Yarber said he was worried it was only another way of criminalizing children.

Lumumba said he would be willing to remove the ordinance from the agenda to allow the council more time to talk it over.

Yarber and Whitwell both said they would be much more likely to approve a resolution on the matter, which would encourage citizens to wear helmets. Violating a resolution, unlike a city ordinance, however, is not a criminal offense.

The ordinance would set up a system of fines between $25 and $75 for anyone seen riding a bike without a helmet. Yarber said he was worried it was only another way of criminalizing children.

Yarber knows that Jackson isn't a bike savvy, "progressive" city with a relatively low poverty rate like Portland or Seattle, and this ordinance would probably seen as disproportionately punitive to young blacks.

I thought it was interesting that Hat Lady wanted to provide helmets for bicycle riders who did not have one or could not afford one. Where is that money going to come from? What new city agency is going to oversee this? Perhaps the same one who will champion the curfew violators...