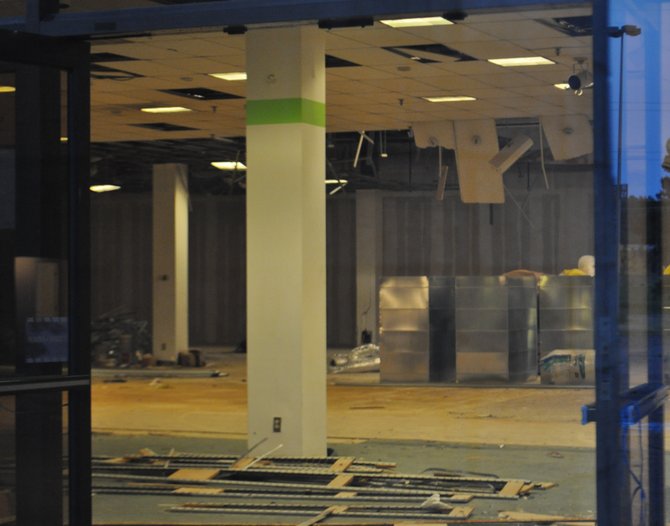 David Watkins said the lawsuit and liens subcontractors filed on the Metrocenter project are commonplace when developments hit a snag and projects are delayed. Photo by Trip Burns.

Recent reports surfaced on WJTV about a lawsuit and a few subcontractor liens, including Design Interiors, filed against Watkins and Retro Metro. Garrett said Watkins' suits with subcontractors are a private matter, because they don't involve public funds.

"I think (the media) are pressing real hard on Mr. Watkins. I don't know what that's all about," Garrett said. "The tone of the conversation indicates that there's a witch hunt against Mr. Watkins."

Delays in construction of the project led to subcontractors filing claims alleging they had not gotten paid for work completed. Watkins said he didn't know anything about the liens until a television reporter put them in his face recently during an interview.

It is Watkins' understanding that the liens, which are the responsibility of the remaining partners in Retro Metro, are in the cancellation process. Watkins left the Metro Retro partnership about two months ago. Garrett told the JFP last week that the partners were taking care of the liens.

Watkins said his company is working to get the court to dismiss one lawsuit, which he said is invalid. Such lawsuits and liens are commonplace in development projects, especially when there are long delays in construction, he said.

"When the project shuts down, subcontractors get nervous that they're not going to get rehired," Watkins said. "(I), along with the remaining Retro Metro partners, we're analyzing these claims. We're seeing what's valid and what's not. Those claims that are valid, we're going to pay them."

The Mississippi Development Authority declined to comment on whether or not delays and resulting legal action are commonplace in large development projects.

Watkins says he left the Metrocenter project because he needed to focus on Farish Street. Renovation of the former Belk building at Metrocenter was taking up too much of his time and effort, he said.

"We ran into some problems, obviously, at Metrocenter because of all the delays and because of the construction issues on the cost to complete. It was requiring a whole lot of time from me to help raise the additional money that was needed to complete the project," Watkins said Monday.

He added that he left the project in the more-than-capable hands of his former partners in Retro Metro: Socrates Garrett, LeRoy Walker and Howard Catchings. Watkins said the project is within 15 percent of being complete, and he believes Retro Metro will have the project completed in a little more than a month.

The city signed a contract with Retro Metro to develop the former Belk building to house six city departments, including human and cultural services, water and sewer, and parks and recreation. Under the contract, the city was supposed to pay for the equipment and installation of new network cables and a communications system in the building, Watkins said.

Construction on the project hit a snag when construction had to stop last winter until the city installed the necessary 19 to 20 miles of networking cables in the ceiling, Watkins said.

City Communications Director Chris Mims said both parties--the city and Retro Metro--took mutual responsibility for the misunderstanding about the communications wiring in February and worked out the issue.

The city and Retro Metro reworked the contract to have Retro Metro install the network cables, with the city paying $50,000 up front for the wiring and another $200,000 plus interest over five years.

The city paid $50,000, less than 1 percent of the total project cost, toward the communication wiring upgrades.