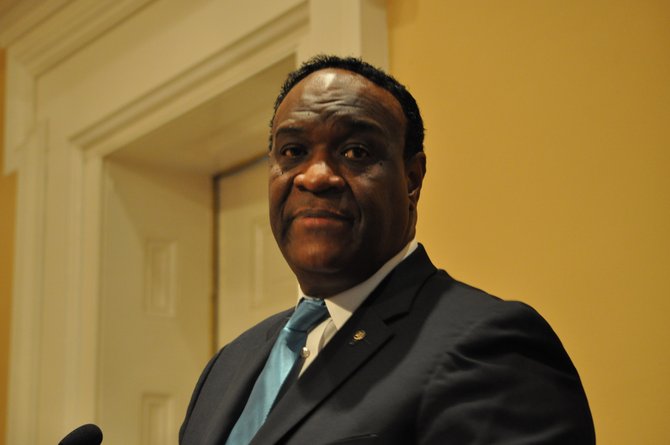 Retro Metro partner Leroy Walker says that the former Belk building will be ready for one city department to move in by Aug. 31. Photo by Trip Burns.

Watkins Development is facing lawsuits from subcontractors who say developer David Watkins has not paid them for work they did at Metrocenter Mall.

The city, which plans to move six departments into the former Belk building this fall, made one thing clear Monday: they will not pay for David Watkins' mistakes.

Watkins and his partners at Watkins Development signed a disassociation agreement with the remaining partners in Retro Metro, the group that is currently renovating the former Belk building at Metrocenter. Retro Metro partner Leroy Walker told the city council that Watkins resigned from the mall project to focus on the Farish Street entertainment project.

The City Council met Monday with Walker and Socrates Garrett, two of the three remaining partners in the Metrocenter project, at City Hall. City Attorney Pieter Teeuwissen assured council members that the city is not liable for any legal actions against Watkins.

"Whatever problems Mr. Watkins has, those are his problems," Teeuwissen said. "We do not have any obligation to pay any lawsuits that he may be involved in."

Teeuwissen said that as of Monday, no one had notified his office that there were any claims against the city. Ward 2 Councilman Chokwe Lumumba asked Teeuwissen if he saw any possible legal claims related to the Metrocenter project coming in the future.

"I do see something on the horizon, but it would be from the city taking legal action, not legal action against the city," Teeuwissen said. "Hopefully, with Mr. Walker, Mr. (Howard) Catchings and Mr. Garrett, who are three respected business men in this community, taking over this project, hopefully, we won't have to have any litigation whatsoever."

Watkins did not return phone calls by press time.

City Council members were not happy with Jackson Public Schools' request for a higher budget than the one JPS board agreed to June 26.

JPS originally scaled back its operations budget from $72.5 million in 2011-2012 to about $69 million for the 2012-2013 school year. When board president Sharolyn Miller and superintendent Cedric Gray presented a budget to the city council Monday, many of the previous cuts were gone.

Miller said JPS had to hire replacements for some of the 100 teachers who left, buy new textbooks and make improvements to school buses.

The district has to find a way to pay $2.3 million toward a pair of bond issues they received in 2006 and 2008, totaling about $150 million. When the district received the bond issues, they were supposed to pay them off with gradual tax increases. Instead, the district used their reserve funds to make payments on the bond issues.

To make the payments, JPS will likely need the city to approve a millage increase. Mills are a way of measuring property taxes. One mill is equal to about $10 in taxes on a house value of $100,000.

Regarding Watkins, it looks like the bloom is finally off the rose.

Over $5 million of taxpayers money missing from Retro Metro account. Contractors not paid. The renovation of the Belk building a year behind completion. It appears some criminal activity has taken place. When will the state auditor start looking at this problem? Or is it a job for the attorney general's office? Where is Mayor Johnson on this illegal activity? I congratulate the Jackson City Council for starting an investigation of this project but the investigation should cover all taxpayer funds awarded to Retro Metro, not just the $50,000 the city has advanced. The citizens of this state need to know what happened to the over $5 million that is missing and what actions are being taken against whom ever is responsible for misusing these funds!!!

All, we don't know the truth of the above comment, and will look into these assertions.

Slick, calm down. No one's talking about $5 million being missing or misused, as far as the JFP has been able to ascertain, so please provide your source for this information before you start slinging accusations of criminal activity.

Retro Metro raised $5 million from a PRIVATE bond issue (not taxpayer funds) to finance the project.

WJTV raised questions about $50,000 the city provided for the project and has said repeatedly that one of the Retro Metro contractors has stated he can account for the funds. The Mississippi Development Authority has told WJTV that no tax dollars are involved.