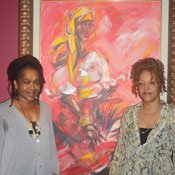 Jazz musicians Rhonda Richmond (left) and Cassandra Wilson have opened Yellow Scarf, a new music venue that focuses on nurturing the connections between musicians and the audience.

Cassandra Wilson and Rhonda Richmond want Jackson to listen to music differently. Wilson, a Grammy Award-winning vocalist, and Richmond, a multi-instrumentalist and singer/songwriter, have opened Yellow Scarf, a new kind of music venue for the city.

Situated in a former photography studio on the edge of downtown, it will serve as an intimate space for music lovers who want to focus on the performance rather than a social scene.

"Sometimes music can become a backdrop to whatever's happening in a room," Richmond said. "We were interested in providing a space for listening to the music."

The venue is the latest collaboration between the two longtime friends. Wilson and Richmond both grew up in Jackson in the Shady Oaks neighborhood and met while playing in the marching band at Powell Junior High (now Middle) School. Years later, they reconnected while attending Jackson State University, where they formed the group Past, Present, and Future. It was an all-female band that featured Richmond on violin and Wilson on vocals and guitar. The group performed a wide range of musical styles, an approach that Wilson believes came from growing up in a city where musicians did not pay much attention to the lines between musical genres.

"Because it's the crossroads of the South, you hear all kinds of music here," Wilson said. "It's not in (a Jackson musician's) psyche to delineate so much between the types of music."

Another early influence on Wilson and Richmond was John Reese, the late founder of the Black Arts Music Society.

Reese presented many legendary jazz musicians in Jackson during the 1970s and '80s. "We came through that group and learned a lot about the importance of live music," Wilson said. "(Reese) always said to us, 'You have to have a space.' I believe (Yellow Scarf) is picking up where he left off."

The two musicians have continued to collaborate since their college days. In 2000 they formed Ojah Media Group, an entity that has produced albums for both Wilson and Richmond. The company is now branching out into presenting music through Yellow Scarf.

Prominently displayed at the venue is a painting of the Yoruba deity Oshun. Yellow Scarf takes its name from that image.

The performance section is a spare space with a high roof. With no stage, the audience sits close to the musicians, facilitating connections between them.

"It's very close and intimate," Wilson said. "The audience is close enough to actually impact what happens with the music. It's really important for that intimacy to happen in order to have real improvisation."

Wilson and Richmond are not requiring Yellow Scarf's featured musicians to play a specific amount of time. Instead, they will give them the flexibility to develop their own performance.

"If you allow a musician to carry through with what his feelings are and his ideas, it's much better," Wilson said.

"Instead of trying to restrain them, they will follow their own energy."

Yellow Scarf had a "soft" opening in March, with a well-received show by Jackson jazz pianist Andy Hardwick. It was the club's first "Honoring the Masters" concert, a planned monthly series at the venue that will feature Mississippi's master jazz and blues musicians.

Wilson and Richmond will also perform at Yellow Scarf. Richmond is planning a weekly Thursday night residency at the space. She believes it will be an ideal location for introducing audiences to her original songs.

"A lot of people like to hear familiar music, and mine may not be necessarily familiar," she said. "I think it can become familiar in a space like this."

While Wilson continues to tour internationally, she plans to perform at the venue for Jackson audiences two or three times a year.

The two musicians would also like to offer music classes in the space for local school-age children who are not able to afford private music lessons.

Wilson and Richmond believe that Yellow Scarf can help to usher in a new way of experiencing live music in Jackson.

"We're hoping to stir up more great music and great audiences," Wilson said. "You've got to have both. The audiences help to create the music."

Yellow Scarf's Premiere Weekend is Friday and Saturday, April 6 and 7, with a program titled "Wine, Women and Wisdom." It will feature performances by Richmond and singer Tawanna Shaunte Friday night at 8 p.m., and a performance by Cassandra Wilson Saturday at 9 p.m.