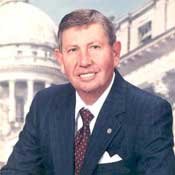 District 73 Rep. Jim Ellington was busy getting ready for a fundraiser for the Central Mississippi National Rifle Association on Sept. 22 when he gave this interview. The Raymond resident has kept his seat in the Mississippi House for the past 24 years, and like most Mississippi Republicans, Ellington is in favor of the least government intervention possible.

He graduated from Mississippi State University in 1966 with a bachelor's degree in mechanical engineering and worked as a mechanical engineer before getting into politics. The 67-year-old is a partner in Louisiana-based Traffic Control Products, which sells items such as traffic controls, signs and barricades. Ellington faces Democrat Brad Oberhousen in the Nov. 8 elections.

How long have you been a member of the NRA?
I'm not a member; they just endorse me and support my candidacy.

You are a proponent of gun rights?
I am very much so.

Do you think that should change?
No. I think that's fine. You need a permit to carry a gun. NRA supports that. There is no problem there.

Do a lot of bills come up in the Legislature to regulate guns?
No. Just about one or two. I think it was (Texas Gov.) Rick Perry who said he believes in gun control. Sometimes you have to put two hands on the gun.

What does that mean?
(Laughs) Hold the gun with two hands instead of one.

Oh, that must be a joke. Of all the bills you have sponsored or introduced, what are you most proud of?
I am most proud of raising the age-of-consent law from 14 to 16. That was 12 years ago. We were trying to do that, and it was difficult. We couldn't get it out of committee.

Fourteen? That's young.
That's what I said. We were the only state that had a 14-year-old age to consent.

Should it be raised to 18?
I think we were lucky to get it to 16, so I think you quit while you are ahead.

Jackson often feels snubbed by the Legislature, especially when it comes to getting state bonds. What do you think of that?
There are some certain economic advantages the city of Jackson gets from being the capital city. But there are economic disadvantages such as Jackson having so many government buildings that aren't on the tax rolls. I am not saying that it balances out, but there is a disadvantage when you don't have a lot of buildings on the tax rolls.

In terms of the city getting a fair shake when it requests bonds, do you think that's an issue?
The state does not need to take over the financing for the infrastructure of the city. We can have revolving loan funds available and that sort of thing that actually direct the payment of the bonds for infrastructure for the cities. Where do you stop? What about Hattiesburg? Do they deserve for the state to fund their infrastructure? What about Gulfport or Vicksburg?

In tough budget times, what should the state do to generate revenue?
Create more jobs. We just had a special session to create the potential—over a period of time—to create 3,000 to 4,000 jobs. Those people will pay taxes into the state and buy things and pay sales tax, which helps the cities and state.

But some of those jobs that the Legislature signed off on are still several years away. So is there anything that can happen sooner?
You don't want to increase taxes—if that's what you are going for. That will slow things down. You might get a bump in income, but over time it slows things down.

Do you have any changes you would recommend for the Public Employees Retirement System?
I would not recommend any changes to the existing employees. I think (Mississippi Attorney General) Jim Hood even said that's a contract. When they got hired it said: You work for this many years, and this is what you get. But on new hires, if they want to tweak it and change it for them, we could look at that.