A New Face for Chinese Cuisine 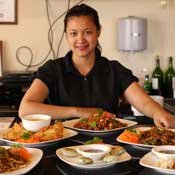 For the better part of three decades, Ding How (6955 Old Canton Road, Ridgeland, 601-956-1717) was Jackson's choice for a Chinese buffet. Originally opened in 1979 by Lina Lynn's aunt on Interstate 55, Ding How was the first Chinese buffet in Jackson. Lynn took control of the restaurant in 2009, and she decided it was time for a change. She sold the I-55 location, and Ding How relocated to Ridgeland.

After a family showdown over technique, Lynn reopened Ding How as an Asian bistro and the first restaurant in the Jackson area to serve dim sum, a Chinese version of brunch centered on a variety of small steamed or fried dishes. Lynn and Ding How focus on authentic, cooked-to-order cuisine with a focus on low fat and low cholesterol.

How did you decide to change from an all-you-can-eat-buffet to a bistro and dim sum restaurant?
Well, I saw the future when I saw all my customers coming in. They love our food, but they can't stop eating. I'm afraid that while I'm feeding my customers, I'm also making them fat. Most people go to a Chinese buffet, and they think it's like fast food, but it's not true. Chinese food can be healthy if you order from the menu in the correct combinations. My concept in this restaurant is that all the food will be cooked with low sodium, low cholesterol, low oil and no MSG (monosodium glumate). After people eat here, they can walk out not feeling guilty.

Was there a backlash from the change?
Yes, it was huge, especially on the first day. We had 50 walk-ins for lunch, 48 left. Fortunately, the two that stayed brought us 200 customers.

What is your role in the restaurant? Are you in the kitchen or just managing?
I'm everything. Yes, I'm at the front of the house, I'm the main one who controls the recipes, and I'm the one who makes all the sauces.

Do you have any trouble sourcing your particular ingredients in Jackson?
Yes, I do have trouble. I get lots of my ingredients from Atlanta and New Orleans, but I occasionally go to China to regain my bearings. We also get products from an organic farm in the Laurel area. It's a Vietnamese family running the farm so we're getting lots of fresh, Asian vegetables from them, especially during the summer.

When did you realize that your profession was cooking?
Believe it or not, that was actually just a couple years ago when I started doing a restaurant like this. Before, when I was doing a buffet, it was just a living. That's what everybody does. Many Chinese came to the U.S., opened a restaurant, and continued to do so because it's the family business, but when I fell into a restaurant business like this, I loved doing it. I'm just so happy to see people enjoying my food and they have compliments with each and every bite. And I'm so happy to see them clean out the dish. I said, "This is what I'm going to do for a living."

Aside from not being a buffet anymore, what do you think sets you apart from other Chinese restaurants in Jackson?
We serve home cooking, Fuzhou style.

What is the most invaluable kitchen tip/trick that you learned?
Ingredients are ingredients, sometimes two different kind of ingredients combined can give you an awful taste. Sometimes they can give you great, amazing taste. So, the different combinations can be tricky to learn.

Season chicken breast with salt and pepper and grill over medium heat.

While the chicken is grilling, combine the cherries, chardonnay, Sriracha pepper sauce, fish sauce, and brown sugar in a saucepan and season to taste with salt. Bring the sauce to a boil and then reduce to a simmer.

Plate the chicken, cover with the remaining sauce, and garnish with the chopped parsley.