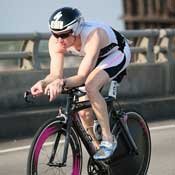 Dr. Larkin Carter, shown in New Orleans, will be the first Mississippian to compete in both the Las Vegas and Kona Ironman Championship races.

Emerging from the water in the Memorial Hermann Ironman 70.3 Texas last May, Dr. Larkin Carter found himself 10 minutes off his normal pace. The 49-year-old, originally from Meridian, had struggled in his 2.4-mile swim.

Carter, a radiologist at the Baptist Breast Health Center in Jackson, was competing against 325 athletes in his age group, all racing for one of seven spots in the Ironman World Championship triathlon in Kona, Hawaii, in October.

Competing in his two best disciplines, the 112-mile bike ride and the 26.2-mile marathon, Carter slowly made up time and worked his way into contention. He ended finishing in eighth place for his age group, and due to an Iron Man rule that allows those already qualified for the world championship to pass their spot to the next entrant, his finishing time earned him a spot in Kona.

In April 2011, Carter finished first in his age group at the Ochsner Ironman 70.3 New Orleans. That finish qualified him for the Iron Man 70.3 World Championship in Las Vegas in September 2011. No athlete from Mississippi had ever qualified for both the Las Vegas and Kona Iron Man events.

A typical weekday begins at 5 a.m. so that Carter can get in an hour-and-a-half of workout time before he begins his regular job each day. From 7 a.m. to 5 p.m., Carter works at his Baptist clinic trying to save lives. Carter has spent the last 18 years reading x-rays in mammography screenings. After work, he gets in another 40-minute workout.

Weekends involve more workouts for Carter. He gets in about 100 miles on his bike and a two and half mile run. Carter also frequents Courthouse Racquet and Fitness on Lakeland Drive to work on his swimming for Iron Man events.

To bring attention to breast cancer awareness, the Baptist Breast Health Center sponsors him in his events, which is why he races with bright pink wheels.

"This is good for our state, and it is a chance to get young people involved in racing" Carter says about getting the word out about the races.

Since he started running and biking 10 years ago, Carter says he discovered he had a "talent for running and just did not know it." Carter enjoyed the exercise and began training for Iron Man competitions three years ago. He gives credit to his older sisters Sara Ford and Beverly Grant, along with his wife, Cynthia, 48, and their children—daughters Frances, 18, and Katie, 15, and son Drew, 20—for helping him reach his goals.

"This sport takes up a lot of time, and with 15 to 20 hours a week for training, you need a good support system," he says.

Carter's goals for the two big events are finishing in the top quarter of his age group in Vegas and in the top half of his group in Kona. He also hopes to break the 10.5-hour mark, his personal best to date, in Kona. More than winning, though, Carter says he hopes to enjoy the experience.

"My most important goal is my hope to make Mississippi proud," Carter says.

More than 2,000 athletes will start the Kona race. Anyone who cannot make it to Nevada or Hawaii to cheer Carter on personally can follow his progress at Ironman.com for both the September race in Vegas and the October race in Kona.