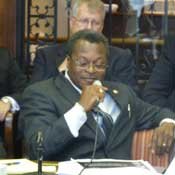 Percy Watson knew that getting the Mississippi Legislature to fund a disparity study was a long shot, but he had hoped it would somehow make it through the Republican-majority Senate last week. The House Ways and Means Chairman's measure, however, ultimately failed, with Gov. Haley Barbour indicating that he would veto the bill if it came to his desk with the disparity study, Watson said.

"I've been around here a long time, and I know the political realities of this body, and you have to live to push that issue another day," the representative of 32 years said moments after the Legislature adjourned from special session Sept. 2.

In 2000, the Legislature passed a bill establishing the Advantage Jobs Incentive Program, a tax-rebate program for companies and new jobs that the Mississippi Development Authority manages. The bill also required MDA to conduct a disparity study, to evaluate how well the state is doing in hiring minorities, but did not appropriate funds for the study at the time.

As time ran out, the debate over including a disparity study, priced at up to $2 million, in a jobs incentive bill died with a whimper. The House approved the Senate's version of the $175 million bill to bring two companies to Mississippi, which left out the study, in a 109 to 3 vote.

The incentive packages would bring California-based Calisolar, a silicon manufacturing plant, to Columbus and HCL CleanTech to Olive Branch. CleanTech would also open a commercial facility and research and development center in Grenada and three large-scale commercial plants in Booneville, Hattiesburg and Natchez. CleanTech converts biomass materials such as woodchips to biofuels.

Members of the Senate had few concerns or complaints over the incentive package. But several House Democrats, especially those from the Delta, expressed concerns that minorities would not get a fair shake in the deal. Rep. Willie Perkins, D-Greenwood, said that he was tired of voting for state funds to go to projects destined for areas other than the Delta.

"African Americans and minorities are not getting money or contracts from this state," Perkins said during a Ways and Means Committee meeting. "... I've seen a lot of projects come through here, and every one of them goes to other communities. I have constituents that need jobs and want to buy homes and want to send their kids to college just like other folks in Mississippi."

Several House members advocated for the bill to include stronger language to ensure that minorities would be included in the 1,800 jobs that the companies are expected to bring to the state. After a mid-morning House Ways and Means Committee meeting during the special session, lawmakers inserted the disparity study into the bill.

Rep. Cecil Brown, D-Jackson, said that he has pushed for the state to fund a disparity study since 1991. The state has no data on the percentage of non-white workers being hired, or how minority contractors are faring compared to non-minority hiring or contractors in the state, or to other, comparable states.

At 5:30 p.m. Friday, the House Ways and Means Committee met to consider the Senate Bill—which did not contain the study—and faced the reality that the disparity study was on the verge of death. At that point, the committee would have prolonged the process by amending the bill, adding the study for the Senate to approve. At a cost of $59,000 a day, extending the special session would have negatively reflected the House leadership, Watson said.

"We had the choice of not passing the whole bill or passing the bill without the disparity study," Watson said. "So I hate that, but that's the way it went down."

Last month, three U.S. solar-power companies went bankrupt, and The New York Times reported last week that solar-panel prices have decreased by 30 to 42 percent per kilowatt-hour in the last year because manufacturers, especially in China, have increased their ability to make panels.

"I still have a lot of questions that haven't been answered," Brown said. "The public gets mad at us for saying that we don't know what's in a bill, yet we are  given a bill at 10 a.m. in the morning  and expected to vote on it by the end of the day."