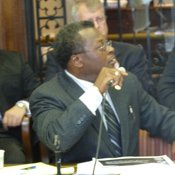 Several black representatives have expressed concerns today that a proposed funding bill to bring 1,800 jobs in the state will overlook minorities. In a special session Gov. Haley Barbour called for today, the Mississippi Legislature will vote on $175 million in bonds and incentives for two technology plants to open in Mississippi and a tax-rebate program for Pascagoula-based Huntington Ingalls shipyard to create an additional 3,000 jobs.

The incentive packages would bring California-based Calisolar, a silicon manufacturing plant, to Columbus and HCL CleanTech to Olive Branch. CleanTech would also open a commercial facility and research and development center in Grenada and three large-scale commercial plants in Booneville, Hattiesburg and Natchez. CleanTech converts biomass materials to biofuels.

During a House Ways and Means Committee meeting yesterday, Rep. Earle Banks, D-Jackson, criticized the Mississippi Development Authority for not providing enough information for legislators to make an informed decision. "I am wondering why MDA cannot invest in $45 worth of paper to give us a written presentation for $175 million in bonds," Banks said. "... I feel offended. You have not given me the respect I deserve as a legislator."

Rep. Willie Perkins, D-Greenwood, became visibly angry as he described the need for more jobs and state funds to come to the Delta. He also questioned MDA Chief Financial Officer Kathy Gelston about how many minorities and minority contracts the companies would hire.

"African Americans and minorities are not getting money or contracts from this state," he said. "... I've seen a lot of projects come through here, and every one of them goes to other communities. I have constituents that need jobs and want to buy homes and want to send their kids to college just like other folks in Mississippi."
Banks and Perkins said they wanted language in the bill that would guarantee jobs for minorities.

Gelston said that including minorities have been part of the MDA discussions with CleanTeach and Calisolar, but that often it can be a limitation to companies. Gelston added that the companies have had offers to locate to other states, and placing restrictions on who they could hire could result in Mississippi losing jobs altogether should they decide to go somewhere else.

"They tell us that even though they try, they have trouble finding enough minority contractors that have the skill set that they need to fill up their facilities," Gelston said. "If we put a specific goal in that document, that might cause them to either not meet those requirements or pay more than they would in the free market."

MDA provided a detailed document to legislators today at an 11:30 a.m. Ways and Means Committee meeting. Calisolar Board Chairman John D. Correnti and HCL CleanTech attorney Dennis Cuneo were present at the meeting to answer questions from legislators. Correnti said he would support stronger language added to the funding bill to encourage minority participation.

Ways and Means Committee Chairman Percy Watson said the Legislature passed a bill in 2000 to conduct a disparity study to determine the number of minorities receiving contracts from businesses in the state, but has not yet funded that study.

The House will reconvene this afternoon to vote on the bill. The Senate voted unanimously this morning to pass the bill.

"They tell us that even though they try, they have trouble finding enough minority contractors that have the skill set that they need to fill up their facilities," Interesting quote from the MDA director. If this is indeed a problem and a prohibitive factor in economic development in the state, shouldn't the state invest more in the human capital development of its black citizens? In other words, stop short changing MAEP in order to help provide $175 Million in "tax incentives" to these companies who are telling the state that it doesn't have enough qualified minority residents to hire. If the state is serious about economic development in all communities, then put your money where your mouth is, Mississippi. Investment in the people in those communities is a must!