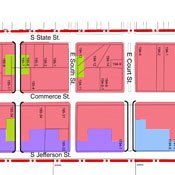 A portion of the Old Capitol Green mixed-use district includes South and State streets where a proposed liquor store would be located.

Earlier this year, the developers asked JRA to allocate bonds to construct the garage. The parking garage would be located on Full Spectrum property between Hal and Mal's on Commerce Street and an unused Greyhound bus station on Jefferson Street.

JRA attorney Tony Gaylor told board members yesterday that Full Spectrum was open to the idea of using the state's special parking-facility taxing districts to help finance the garage. Much like tax-increment financing, the district's property owners, including Full Spectrum, would pay additional property taxes to help with the garage's bond payments. The garage would have 800 spaces, and Full Spectrum has guaranteed that it will have 600 spaces leased to office workers and residents.

A few years ago, the city of Jackson approved a zoning ordinance for the 50-acre district that spans 14 blocks along Commerce Street between Pearl and Silas Brown streets. The district requires that all new developments and major renovations adhere to Old Capitol Green Sustainable Design Guidelines.

"In essence, the folks in the old Capitol Green area would assess a tax on themselves to build a parking garage," JRA Executive Director Jason Brookins said yesterday. "We would probably still have to float a bond to build it, but the taxes would pay off the debt service."

"There is going to have to be a commitment from all the property owners in the proposed district and that's still up in the air," he said.

Malcolm Shepherd, Full Spectrum director of development, said that the special tax district is still in the planning phases and couldn't offer specifics on how much the district would generate annually or how much residents would be taxed. Shepherd said he has not contacted any property owners yet.

"If they want to be taxed that's fine, but as far as ramming it down their throats, I couldn't do that," board member John Reeves said during the meeting.

"Right now we are searching for an attorney who can provide guidance on how (the special tax district) would work," Shepherd said. "The property owners throughout the district would be assessed a fee to develop and operate the parking garage. I'm assuming that other property owners would have to buy into it."

The board voted to require Full Spectrum to present information on proposed financing at an unspecified date.