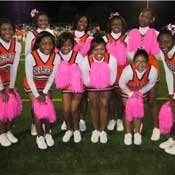 "Black Out" games look awesome at night when fans wear black. "White Out" games are better in the day as fans wear white. Before last Friday, though, I had never had a seen a "Pink Out" game. That is what I found as Callaway High School took on Ridgeland High School.

Callaway put on a "Tackle a Cure" event for breast cancer awareness. Inside the gates was a pink tent with volunteers distributing literature and selling breast-cancer awareness T-shirts and other items. All proceeds at the tent benefitted the American Cancer Society.

Russell Athletic Company provided pink apparel for the Callaway players and coaches. Players sported "Tackle a Cure" stickers on their helmets. The cheerleaders had pink pompoms and pink ribbons in their hair, and in the stands were pockets of attendees in pink, men and women, young and old.

What started with just two Jackson area schools has grown to 10 schools this year. Flowood-based Tackle a Cure has a mission to increase awareness, screenings and promote early prevention. Next year and every year thereafter, the group aims to have every high school in Mississippi, public and private, participate during one October home game.

At Callaway, the Face and Body Center (2550 Flowood Drive, Flowood, 601-939-9999) had doctors on hand to answer questions and provide information. Dr. Dev A. ManiSundaram presented a plaque at halftime to Barbra Alexander, a former long-time Jackson Public Schools teacher who has beaten lung, bone and colon cancer. Callaway football coach Daryl Jones' life has been touched by breast cancer. He lost his mother and mother-in-law to the disease.

Tackle a Cure is based on a similar NFL event. In 2009, the NFL started its campaign for breast-cancer awareness, "Crucial Catch." One of the driving forces behind the NFL campaign is DeAngelo Williams of the Carolina Panthers. Williams has lost three aunts from breast cancer, and his mother is a breast cancer survivor.

The idea of pink cleats worn by players during October was Williams' brainchild. "There's nothing stronger than wearing the thing that keeps you going in the National Football League, and that's your cleats," Williams says on deangelowilliams34.com. "If you don't have a firm foot in the ground, then you're going to slip."

Williams sparked an October phenomenon in the NFL. In 2009, only a few players and coaches wore pink. Now, every player, coach and official in the NFL wears pink during October in a show of support for breast-cancer awareness.

"The starting number is 935,210," Fitzgerald stated on Twitter. "I want my new fans to know they are helping make a difference in the fight against Breast Cancer! Spread the word everyone & #ThinkPink!"

When this article was written, @LarryFitzgerald had 1,019,048 followers. That is more than $8,000 in donations in the fight against breast cancer. Halfway through October, Fitzgerald donated $20,000 to the cause.

Sometimes sports can be ugly. The NFL and NBA have had or are having labor disputes. Greed has overcome college football with teams jumping from conference to conference looking for the best deal. Scandals have dominated the college-football headlines. But there are times when guys like Williams, Fitzgerald, Coach Jones of Callaway and others show the good side of sports. These men are proof that positive things come from sports.

Cancer doesn't see color or gender. It affects us all just the same. And it's not just a slogan: Real men wear pink.

Participate in a Tackle a Cure event this month. On Oct. 21, Madison Ridgeland Academy, Madison Central High School and Raleigh High School will all hold Pink Outs. On Oct. 28, Richland High School will feature a Pink Out. Even you don't normally go to high-school games, this is a great cause.

We can make this event bigger every year. If your school didn't take part in Tackle a Cure, ask that it do so next year. Follow Tackle a Cure on twitter @tackleacure. Also, visit http://www.tackleacure.com or the Facebook page.

Bid on the pink items worn by NFL players at http://nflauction.nfl.com, and find more information about the NFL's "Crucial Catch" campaign on the NFL website (http://www.nfl.com/pink).