Doing it For Jackson 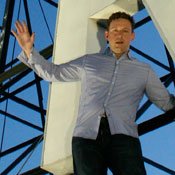 In spring 2010, Grady Griffin received an urgent phone call from Craig Noone. A large oak tree had fallen in Greenwood Cemetery, close to Eudora Welty's grave.

"Do you think I could get that tree and make my tables out of it?" Noone asked Griffin, who is the director of education and training for the Mississippi Hospitality and Restaurant Association.

For months Noone had researched the history of the building at 115 W. Capitol St. that would house the restaurant he had dreamed of opening since he was a child. The south Jackson native decided to name the restaurant Parlor Market, after a grocery store that was located in the space in 1926. It was important to Noone to incorporate Jackson's history into the place through details such as its marble counters, wooden beams and butcher hooks.

"I knew right then that there was something special about him," Griffin said Oct. 17. "It showed how specific to every detail he wanted to be involved in. From menus to material, he wanted to be as local as possible."

Noone wasn't satisfied with just serving food. "People in Mississippi are storytellers, and I wanted my restaurant and the food to tell a story," he said during a September 2011 interview on the radio show "Mississippi Arts Hour" on WLEZ-FM.

Around 1 a.m. Friday, Oct. 14, Noone was driving his Chevy Tahoe when he collided with a Ford Taurus at the intersection of West and Capitol streets. A witness reported that Noone was driving at a high speed when he ran a red light and collided with the Taurus. The two passengers in the Taurus suffered minor injuries, but Noone hit a light pole and was ejected from his car and killed.

On Monday, Oct. 17, a few hours after his funeral, members from Jackson's restaurant community hosted the annual "Steel Chef" event, a fundraiser for the Community Place, a nonprofit nursing home. The event was planned to be a cooking competition between Noone and Mike Roemhild of Table 100. The event became a memorial for Noone, instead.

The death of the 32-year-old chef comes weeks after the upscale restaurant celebrated its one-year anniversary.

After receiving confirmation that the King Edward would reopen, Noone decided to leave his job at Fearing's Restaurant in Dallas, Texas, and move to Jackson. Mart Lamar, a local developer who renovated the building on Capitol Street decided to invest in Parlor Market after Noone presented his business plans over dinner in New Orleans. A few days before his death, Noone had moved into a loft apartment in a building next to his restaurant, which Lamar had also renovated.

"Other people didn't have the guts to go downtown and open a restaurant like that, and Craig thought it was a no-brainer," Lamar said. "He had so much confidence that the restaurant would work that it was unbelievable."

Noone was the first to admit that the success of Parlor Market largely hinged on his staff. When he decided to open his restaurant in Jackson, he called on his friend and chef Jesse Houston in Dallas to help out. Houston brought along fellow chef Ryan Bell from Dallas. The chefs, all 30 or younger at the time, wanted to incorporate fresh, local food, innovative menus, and most importantly, fun into the new venture.

Ramsey said Noone's attention to detail didn't stop at food and décor. He was equally dedicated to empowering his staff to make decisions. Noone didn't hire a general manager, and he weaved seamlessly between the kitchen and dining room, where he spent time interacting with guests.

Parlor Market simultaneously serves as a neighborhood haunt with loyal regulars and an upscale dining place for special nights out. The restaurant also became well known for its pop-up restaurants, transforming into a burger joint, taqueria and steak house for one night each, drawing hundreds of people downtown.

Noone would often to go to extreme lengths to make customers happy. Dan Blumenthal, co-owner and chef of Mangia Bene restaurants, said somehow Noone would find out when his regular customers were dining at other restaurants and would frequently call in to buy them a bottle of wine or dessert.

"I think it would be Craig's desire if the people that he put in place could continue on in his memory," Lamar said. "Craig will be there in spirit."

The Mississippi Arts Hour was previously broadcasted on WLEZ but now it is on Mississippi Public Broadcasting. Hear the entire interview with Craig Noone here.