Baptist Expansion to Include Skybridge 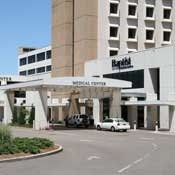 Baptist Health Systems expansion will include a pedestrian bridge on North State Street.

Baptist Health Systems' plan for expansion includes a pedestrian bridge at the intersection of North State Street and Poplar Boulevard.

Baptist is preparing to break ground on a five-story, 180,000-square-foot mixed-use building in Belhaven that will include 750 offices on North State Street at the site where KFC was located. KFC recently closed and construction crews are prepping the building for demolition. Landmark Healthcare Facility will own the medical office building.

The Jackson City Council will vote tomorrow on whether or not to grant permission to Baptist to use airspace to build a pedestrian bridge. Earlier this month, Pizza Shack owner Mike Parker moved his restaurant from State Street to Fortification Street after Baptist purchased their former space.

"State Street has high traffic and the bridge will take away any potential conflicts between pedestrians and cars," Jackson Public Works Director Dan Gaillet said this morning.

Gaillet said Baptist is obtaining construction permits and expects to finish construction in the spring of 2013. The development will also include a parking garage and retail spaces.

This morning, Keifer's Restaurant co-owners Paula Coe and Rick Olsen were helping construction crews complete their new building on Poplar Street. Keifer's remains open in its current location, and Olsen said he has no plans to disrupt business during the move. The owners are aiming for Monday, Oct. 24, to open the new space.

Olsen said the new restaurant has the same floor plans at the original restaurant, which was a former home.

"Before we turned a house into a restaurant, and now we are turning a restaurant into a house--that's our goal," Olsen said.

The new space features hardwood floors, a wrap-around porch with fans and heaters, and murals of the Mediterranean. Olsen contributed his faux-painting skills to create bricks that border the mural.

Olsen said he anticipates more foot traffic in the neighborhood, which should increase business.

Jackson City Council members did not reach a quorum this morning in order to hold a council work session and discuss the pedestrian bridge.