Hotel Study Not Public, Yet 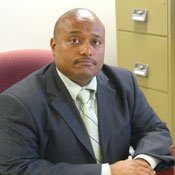 Jackson Redevelopment Authority Executive Director Jason Brookins said a commissioned study on the financing of the convention center hotel is not ready for the public to review.

The public can't see a recently commissioned study on the proposed convention center hotel yet because the figures need revisions, the Jackson Redevelopment Authority Board Project Committee determined yesterday.

The committee is made up of five members of the Jackson Redevelopment Authority Board, a quasi-government agency that is responsible for overseeing revitalization projects in the city. Last month, the JRA board approved a $15,000 contract for C.H. Johnson, a Chicago-based financial consulting firm, to assess the proposed financing for a downtown convention center hotel.

The city is working with TCI, the firm developing the hotel, to finalize financing to begin construction. Jackson Mayor Harvey Johnson Jr. has said this wasn't a deal he would have wanted to carry out, but the developers own the land for the project, and his administration is working diligently to protect the city from financial repercussions.

The board received the study earlier this month, but JRA Executive Director Jason Brookins said that it needs revisions because the consultant was working with incorrect figures.

"He would not have had the specifics on the numbers," Brookins said. "It's not that he had the wrong numbers. He just had the flawed numbers."

He also said that the consultant would prepare an executive summary, which will explain the main points of the study. In response to a Jackson Free Press request for the study, Brookins wrote Sept. 15: "The study being done by C.H. Johnson has not been provided to me. Once received, you may request a copy, and we will comply with the rules of the Mississippi Public Records Act."

Brookins said the study isn't a feasibility study but an explanation of why the hotel is needed. The study also assesses the proposed financing structure for the hotel.

"It's not top secret," he said. "Before we make it public, we want to update the numbers."

"The public would see something that isn't right," he said about the study. "Instead of providing incorrect information, we would rather provide a summary of the right information."

JRA board member Matt Thomas said the study makes it clear that the city needs a hotel, but he wants more conclusive information about where the city would be in 10 years after financing the hotel with public money.

He also expressed concern about the study not being released to the public.

"I have a problem when you pay for something with money (from) the people," Thomas said. "... The man wrote the report, and if he lied, he lied. If he told the truth, he told the truth. ... In the end, I would rather the people have seen it."

Under a resolution City Council members passed last month, the city and TCI will issue $70.1 million in tax-exempt Gulf Opportunity Zone bonds through the Jackson Redevelopment Authority and $22.5 million in taxable bonds to help pay for the project. Total funding for the project would be $96.1 million with the developers contributing some private funds. The bonds would also pay off a $7 million Department of Housing and Urban Development loan developers received through the city of Jackson to acquire the property in 2007. The JRA holds the title to the former Barefield Furniture and Firestone Tires buildings next to the convention center, which could be used for a future expansion. The city will eventually acquire total ownership of the property, which is valued at $14 million.

The city will be responsible for paying 50 percent of the bond debt service through revenues the hotel generates, and the developers will be responsible for the remaining 50 percent. In the event that the hotel does not generate enough revenue to pay off the debt service, the city and the developers will split any losses, city financial consultant Porter Bingham of Malachi Group told board members yesterday.

The city hired Lucien Bourgeois, an attorney at Butler Snow, to facilitate the financial transaction. Bourgeois stressed the importance of moving quickly on the deal so that the city could obtain GO Zone bonds, which expire Dec. 31.

"The governor doesn't want to leave office this year with that money being unused," Bourgeois said. "I believe that (the Mississippi Development Authority) supports this project. ... But we have to move it along."