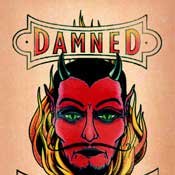 Madison Spencer is 13 years old and is in hell. She claims that her death had something to do with marijuana and has a lot to say while sitting in her hell cell. "Are you there, Satan? It's me, Madison," she says at the beginning of each chapter of Chuck Palahniuk's newest book, "Damned" (Doubleday, 2011, $24.95).

Released Oct. 18, Palahniuk wrote "Damned" from Madison's viewpoint and chronicles her musings and sights while in hell. She shares a cell with a "Breakfast Club" motley of sinners: a cheerleader, a punk rocker, a nerd and a jock.

Palahniuk, 49, has been writing since he was 31. He has published 14 books, two of which have been made into movies, most famously, 1999's "Fight Club" starring Brad Pitt. Palahniuk spoke with the JFP via telephone.

Tell me about your thought process behind "Damned."
It's not apparent in the book, but I wrote it while I was taking care of my mother who was dying of lung cancer. My father was killed about 10 years ago, and with my mother's death, both my parents would be dead. I wanted to express my grief, but I didn't want to write a sad book about someone whose parents were dead. So I decided to write a funny book about a child who was dead herself. So she could mourn her parents, she could still grieve from losing her parents, but they would still be alive on Earth while she was dead herself. So I just flipped the situation and wrote a comedy about the tragedy that was happening in my own life.

Sometimes it's hard to believe that she's only 13.
It's funny, because so many of our favorite books are written from the perspective of children--books like "Jane Eyre." Children are fantastically well-spoken. They have a very sophisticated language. We accept that.

Over the years, I think in a way we have been dumbed down about what we expect from children. We expect children now to be more stupid and less and less (healthy). So I wanted to get back to the kind of children that Henry James wrote about, that Jane Austen wrote about. Their children were smart  and still innocent.

So would you say the book is mainly about finding out how she really died?
That's a big part of it, remembering how she died. But also, she reconnects with her parents by accident, and she also achieves a power position in hell by the end of the book. Then the book is the first of three books, so it has an open ending where she's sort of thrown into crisis in the very end. And that crisis leads to the second book in the series.

Tell me more about the series that you're writing.
It's patterned after Dante's "Divine Comedy." The first book you see her in hell. The second book will place her in the collective purgatory. The book will get her to  heaven eventually.

How does it feel to be appearing at one of Jackson's locally owned book stores?
It feels perfect. I always ask to have events at independents. That gives me a greater freedom to present things that the chain stores won't let me talk about.

What type of things are you planning?
I'll be reading a story that was just published in Playboy that is being made into a movie. So it's a story that people won't have heard before. It'll be brand new to them. And I'll be staging competitions. I typically give out hundreds of inflatable things. People compete throughout the presentation to win prizes. The prizes are books by other people that I really love. It's a chance for me to promote these other writers.

Who are the authors you are supporting?
This year I am promoting the first novel from an author from Columbus, Ohio, named Donald Ray Pollock. Pollock's first book was called "Knockemstiff" (Doubleday, 2008, $13.95). It was a collection of short stories. This year his first novel comes out, and it's called "The Devil All the Time" (Doubleday, 2011, $26.95). It's a very dark gothic novel that takes place in the Midwest. I'm also talking about a friend of mine by the name of Lidia Yuknavitch. She has a memoir that's just come out through a small press. It's called "The Chronology of Water" (Hawthorne Books, 2011, $15.95).

Do you have any advice for any upcoming writers?
First thing in the morning, always get up and read something. Read something you really love the first half hour of your day because it'll put that language in your head. You'll think in terms of written language the rest of your day. You'll be more likely to write in your head. Don't turn on music; don't turn on television; don't talk to people. Sit down and read something you love.