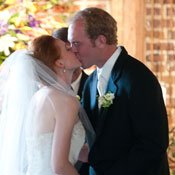 Most grooms consider everything that might go wrong the night before the wedding. For me, those considerations came a year and a half before Rachael Gray-Lewis and I said, "I do."

I come from a long line of Presbyterians--Presbyterian pastors, to be precise. My great-grandfather, grandfather, my dad, and several of my uncles all stand (or stood) behind a pulpit on Sunday mornings. I even worked in the ministry myself for a few years as a youth pastor. Basically, there are a lot of Kenyons, and they are all very Protestant.

Rachael, on the other hand, is Catholic, and the Gray-Lewises come from a long line of Catholic families. While I'm still shaky on some of the Catholic terminology, I believe that "devout" is the appropriate word here.

Most of the obstacles we faced between our first meeting and our first dance came from this religion conflict. It may not seem like a major difference to someone looking in from the outside, but as two people who grew up under different, specific religious codes, this was a big deal--for both of the families. Early on, Rachael and I sat together and debated whether "The Issue" was too big for us. Would the differences in our faiths be too much for our relationship? What would our families think of the idea? If we got married and had kids, what faith would they follow?

Fortunately, our families had nothing but support for us. My dad, whose opinion I greatly respect (and who I thought would be the person most against the relationship) gave me some of the soundest advice I've ever heard. He told me that it's pointless to judge character by denomination: there is no perfect church. It's all about the individual. He told me that if I'd found a keeper, her church didn't matter--the family was behind me 100 percent.

At the same time, Rachael was receiving similar support from her family. I can't testify to the exact advice they gave her, but based on their warm acceptance of me and the flurry of supportive e-mails, there was little doubt that the relationship had their blessing.
We weren't out of the woods, however. This would be my second marriage (I'll spare you the long and painful story), and the Catholic Church would need to grant me an annulment. An annulment, I learned, is separate from the legal divorce I had already gotten and essentially asks the Catholic Church to officially declare my prior marriage null and void in the eyes of God.

I had no reason to pursue an annulment as a Presbyterian, but to marry Rachael, I needed the Catholic Church to grant one.

The process is fairly painless--a lot of writing and talking friends and family into submitting testimony. Compared to the divorce process, I'll take the annulment any day. The only problem was the timeline. It's not unusual for an annulment to take well over a year, and ours was no exception. In fact, as of this writing, we're still in the approval process, although we're expecting a positive judgment any week now. The only reason we were able to go through with the wedding is because of the graciousness and understanding of Rachael's family. After a year of waiting, they told us to go ahead with our plans.

The decision to proceed with the wedding (sans annulment) was difficult to make.

As a Protestant, it was sometimes hard for me to fully understand the magnitude, but as I witnessed the variety of responses to our decision that poured in from extended family, family friends, co-workers and other church members, I understood that this was no small compromise.

What blew us both away, however, was seeing just how many of the friends and family were able to look past the letter of the canon law to see a young couple dying to start their life together. Some, on both the Kenyon Protestant and the Gray-Lewis Catholic side, refused to participate by either not attending the ceremony or refusing to acknowledge the union, citing their religious convictions when they gave a reason. But the vast majority of our families were present and supportive, and for a couple to whom family is everything, this meant the world to us.

Naturally, the wedding itself brought unique challenges, but after the issues we'd already worked through, nothing seemed too big to tackle. And let me tell you, fellas, if you want the wedding planning to go smoothly, marry a local girl. The Gray-Lewis family had a connection for everything--such as Maria de la Barre (The Cake Diva) and her amazing cake designs (my groom's cake was a rocker's fist. The Food Network "Ace of Cakes" chef Duff Goldman couldn't have done better), or Wiggins Photography, who proved that a photographer can be gifted artistically and still fun to work with.

Because we couldn't be married in the Catholic Church, we held both the ceremony (which my dad, Rev. Ozzie Kenyon, officiated) and the reception at The South downtown. The location was fantastic--great food and flowers from Fresh Cuts Catering and Floral, an artistic design, and plenty of space to accommodate our guest list of more than 200 members of our family and friends.

As for the wedding day, well, all grooms say it, and I'll say it, too: When the bridal march began, and I saw my future wife coming down the aisle, everything else melted away. There were no more worries about who the ceremony offended, no concern over how our mutual cases of poison ivy would affect the evening, no wondering about how the reception would go when one family drinks and the other abstains, no mental mantra of "don't faint, don't faint, don't faint," no debate over which pew we'll fill on Sunday morning.

In that moment (and again during our first dance--to the Temptations' "My Girl"), I had an overwhelming sense that whatever tomorrow brought, I'd be facing it side-by-side with this woman, and nothing could make me happier. It's been over a month since the ceremony, and I feel the same way. And I'll bet that if in 50 years you ask me whether that feeling has changed, I'll just smile and shake my head.

That's the plan, anyway, and I'm stickin' to it.

About the Couple
Bret Kenyon, 27, and Rachael Gray-Lewis, 29, were married May 29, 2010. Kenyon is originally from Pittsburgh, Pa., and moved to Jackson in 2003. He is a national sales assistant for WJTV (CBS, channel 12). Gray-Lewis grew up in Jackson and attended St. Joseph Catholic School in Madison and is now a theater teacher there.

Both have bachelor degrees in theater, Kenyon from Belhaven and Gray-Lewis from the University of Southern Mississippi. They continue to be involved in community and professional theater, including work at New Stage Theatre.

The South gave Rachael the opportunity to create a signature drink for the reception. It featured a blend of vodka, pineapple juice and pomegranate juice and was aptly named "The Rachael-Tini."

The meal was served buffet style with a fusion of Mediterranean and sushi.

The Hardline Monks, whose members consist of the groom and three of the groomsmen, played a 20-minute set at the reception. The Monks are an acoustic, eclectic band that covers everything from U2 to Bob Schneider to Vanilla Ice.

Bret and Rachel decided to not take a honeymoon right away and instead booked a room at the King Edward Hotel for the weekend. They made the most of their time together, so much so that they stayed in, had pizza delivered and watched cinematic classics such as "Megashark vs Giant Octopus" on SyFy.

I particularly enjoyed your movie selections during the honeymoon. Are you ready for Sharktopus next? :)