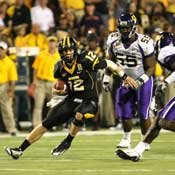 Southern Miss' Bowl Championship Series hopes died when they lost 34-31 to the University of Alabama at Birmingham Nov. 17. The Golden Eagles only had a chance to earn a BSC bid if they won the rest of their regular season games. Instead, USM ended its regular season Nov. 26 with 44-7 victory over Memphis, giving them the C-USA East division title and a berth in the C-USA title game.

On Nov. 25, the Houston Cougars ended their regular season with a 48-16 victory over Tulsa, wrapping up the C-USA West division. By virtue of having the better record, the Cougars get to host the title game.

This is not the first time these two teams have met for the C-USA championship. In 2006, Houston hosted USM for the league title, winning 34-20. The two teams did not meet this year in the regular season but did meet the previous two seasons. Houston won in 2009, 50-43 in Houston. USM won in 2010, 59-41 in Hattiesburg.

With Keenum at the helm, Houston has the number one passing and scoring offense in the Football Bowl Subdivision. The Cougars average 449.7 passing yard and 52.7 points per game, giving Houston one of the most potent offenses in college football.

Because USM is ranked once more in all the major national polls, this will be the first C-USA title game in which both teams are ranked. The Golden Eagles have been ranked on and off late this season.

Defense might be optional when these two teams meet Saturday. Turning the channel might mean your missing a highlight-making play. Both teams are going to throw the ball and throw it a lot. Both teams allow only 20 points per game on defense. USM allows 20.5 points, and Houston allows 20.9 points per game.

The biggest difference might be running the ball. USM averages 207.8 yards on the ground, and Houston averages 163.6 rush yards. Southern Miss might try to shorten the game and keep Keenum on the sideline by running the ball. It is a trick that might work and keep their defense fresh and rested all day.

It would be great to have USM win its conference title game. Southern Miss hasn't won a C-USA title since 2003, and that was before there was a championship game. But losing the championship game might turn out to be better for USM and the other C-USA members. A BCS bid for an undefeated Houston team would bring a nice payday for the conference.

Last season, the Mountain West Conference earned more than $12 million when TCU earned a Rose Bowl bid. That $12 million was split among the MWC teams.

In comparison, C-USA earned just a little more than $3 million from the BSC last season. That $3 million was split between the 12 members of C-USA, working out to be about $250,000 for each member. If a BSC bid for Houston nets at least the same amount as TCU's did last season, it would add another $750,000 for each school.

If USM defeats Houston, the Cougars should still end up in the Liberty Bowl, but the conference would miss out on a big payday. Southern Miss would end up in a bowl game, but there is no chance the Eagles would get a BCS game.

This is one of those strange situations where losing might be better than winning. Southern Miss would get more monetary benefit out of losing to Houston than by winning the C-USA title game. But Southern Miss will not just roll over. Larry Fedora will have his team ready for a conference championship.

If Houston wins against USM, it would become the first C-USA team to ever reach a BSC Bowl. In another strange twist, Houston could bring the conference a big payday before leaving for the Big East after the season.

The Conference USA title game starts at 11 a.m. and will be televised on ABC.