Will They Show Up to Play? | Jackson Free Press | Jackson, MS

Will They Show Up to Play? 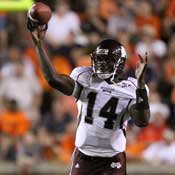 Chris Relf was one of three MSU quarterbacks the Bulldogs rotated without much success this year.

Oxford and Starkville haven't had much to cheer about this football season. Ole Miss and Mississippi State have both struggled on the gridiron. Last weekend, highly ranked opponents blew the Rebels and the Bulldogs off the field again.

It is hard to find positives when neither team has been remotely competitive the last two weeks. I'm trying to convince myself to watch the 108th meeting between them, the 2011 Egg Bowl, but it has little appeal this year.

Still, there are things to play for in Starkville on Saturday night. The question is: Will either team show up to play?

MSU has won only one conference game and is on a two-game losing streak. When you cannot figure out what your identity is as a football all season long, wins are hard to come by. MSU has yet to decide if they want to be a hard-nose running team or a pass-happy spread team.

The Bulldogs have rotated quarterbacks Chris Relf, Tyler Russell and Dylan Favre with little success. Last season, the Bulldogs were a physical running team but have gone away from last season's bruising attack.

Top Bulldog rusher, Vick Ballard, has 156 carries for 865 yards and 5.5 yards per carry average, but MSU does not run Ballard enough. They try to become a finesse passing team after good runs.

The Bulldogs' defense hasn't been bad but seems to tire out; the offense cannot sustain drives. Last season, MSU seemed to get every bounce or break, but those breaks have been hard to come by this year.

MSU still has something to play for against Ole Miss. With a win, the Bulldogs will be bowl eligible. Right now seven bowl-eligible SEC teams out of nine are guaranteed bowl spots. If MSU can get the magical sixth win against the Rebels, their season won't end Saturday. A win also means the Bulldogs can try for back-to-back winning seasons for the first time since Jackie Sherrill led MSU to 10 wins in 1999 and eight wins in 2000.

A win in a bowl game would make the Bulldogs 7-6. A loss against Ole Miss means the Bulldogs will stay home for the holidays.

As bad as things have been at MSU, they have been worse for the Ole Miss Rebels. The school fired head coach Houston Nutt with three games to go, and the Rebels' response has been lackluster. The Rebels have not rallied around their fired coach. (Don't feel too bad for Nutt. He's pocketing $6 million just to leave Oxford.) In fact, they seem to be just going through the motions.

The previous low point for the Rebels this season was its 21-point loss to Louisiana Tech, but last Saturday, the Ole Miss players found ways to make new low points. I saw something I had never seen before in college football in the game against LSU.

The LSU Tigers ran a quarterback bootleg with a third-string quarterback that went to the one-yard line. With five minutes left in the game, and LSU at the Rebels one-yard line, the Tigers started taking a knee to run the clock. LSU coach Les Miles was doing everything he could to not run up the score on the hapless Bears, er, Rebels.
LSU's 52-3 beat down was the worst margin of defeat for the Rebels since Georgia's 49-0 win in 1974. I wonder if the Peach State Bulldogs took a knee with five minutes left in the game that day.

Ole Miss has lost 13 straight SEC games. The last time the Rebels won an SEC game was a 42-35 win over Kentucky Oct. 2, 2010. (It's almost fitting that their last win this year was Oct. 1 in a 38-28 win over Fresno State.) The last time the Rebels didn't have even one SEC win in a season was 2007. That was the last season Ed Orgeron roamed the sidelines before Nutt was brought in.

As forgettable as this season has been, the Rebels have a couple of things to play for in the Egg Bowl. They might even stop adding new low points. The Rebels have never lost 10 games in a football season but at 2-9, they have no margin for error. A loss against MSU and the Rebels will go 2-10 this season.

Mississippi can break their school-record 13-game SEC losing streak, or at least keep it from becoming a school-record 14-game streak. Heck, I would think it would be something to see the Rebels just show up to play this Saturday.

Likewise, it would be nice to see MSU do the same thing.

If you can stomach it, the game will be at 6 p.m. on ESPN U. I am dubbing this game the "Go Bowl or Avoid the New Low" Game.