The Best Meal I Ever Ate: Thai House 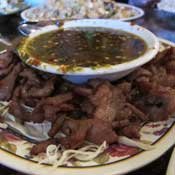 When it comes to dining in Jackson, the Mao Tod Gathim Prik Thai from the Thai House (1405 Old Square Road, 601-982-9991) is a solid entry into the category of "The Best Meal I Ever Ate." It's an unassuming menu item, falling near the back at No. 68. Consisting of fried pork served with a Thai dipping sauce, it's often lost in the sea of Larbs, Paht Priks and Pad Thai.

Few things may be more foreign and possibly even repulsive than a bottle of fish sauce. I'll admit that the idea of eating the extract of fermented anchovies doesn't sound too appealing, but it is simply delicious for those with a predilection for Thai and Vietnamese cuisine. In its most basic form, Nam Prik Pla is simple mixture of sliced chilies and fish sauce often with other components added. At the Thai House, the Nam Prik Pla is made with limejuice, fish sauce, sugar, garlic and Thai chilies—lots of Thai chilies.

One thing that really sets this dish apart from other Thai offerings is its rarity. I've eaten at my fair share of Thai restaurants, and the Thai House is the only place I've seen Mao Tod Gathim Prik Thai. When I asked the Bunnirans, owners and operators of The Thai House, about the dish, I got an interesting answer. Tim Bunniran says it's a custom creation from the Thai House kitchen.

While the origins of Mao Tod Gathim Prik Thai are debatable, there's no doubt where Thai House chef Toon Bunniran learned to cook such excellent Thai cuisine. His mother, Tim, taught him but, interestingly, her mother didn't teach her.

According to Tim Bunniran, her mother was constantly in the kitchen, always working on the next meal, but she never passed the secrets on to the next generation. As a result, the flavors we all know and love at the Thai House are the result of Tim Bunniran recreating the flavors of her mother's dishes.

Mao Tod Gathim Prik Thai ranks high as one of Jackson's "Best Meal I Ever Ate" because of the combination of fried, palm-sugar-sweetened pork and the pungency of Nam Prik Pla. You can be timid and dip the pork into the sauce and enjoy the dish with a side of white rice, or you can use my method: Pour the Nam Prik Pla over the pork and rice and dig in. Your taste buds will thank you.