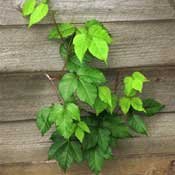 Discovering poison ivy in the backyard is one of the many homeownership joys.

I don't say that in a negative sense, but buying a house takes an ignorance and an outlook that can only be defined by the word "idiot." I'm allowed to say this because I'm one of these idiots. For the past 18 months, I have belonged to that exclusive club known as "home owners," and let me tell you, it's been a ride.

The moment you sign the papers and the keys become yours, the education begins. It's not so much the information you're learning about the house or equity or basic maintenance; it's an education in how much you don't know. When I first looked at my house-to-be, I saw plenty of projects. This will need fixing, that will need replacing, those will need to be painted. But these were all things I knew how to do. I was confident, as most men foolishly are, in my ability as a handyman to conquer all problems.

This was before I learned that there was no insulation in the attic, and I would have to squeeze myself (and loads of fiberglass) through a square-foot hole during the hottest months of the summer.

This was before I knew that the front wall of the house was so rotten, the wood now had the consistency of toothpaste.

This was before I knew that if your dog runs into the backporch support pillar hard enough, it dislocates. There were uninsulated pipes, a junkyard in the crawl space, poison ivy all through the back yard and parts of the stairwell that broke loose like a scene from "It's A Wonderful Life." We even found a grill, a full sandbox and a complete load of bricks buried in the backyard.

Of course, there was no way of knowing about some of these things pre-purchase. And maybe that's a good thing. Maybe a house, like a marriage or having a child, is supposed to look easier than it is. If we knew all the work ahead of us, we'd all be single, childless and living in apartment complexes. If we didn't have those moments of idiotic optimism, we'd miss out on some of the most difficult, but the most rewarding, aspects of life.

If I hadn't been an idiot, I might not have experienced the pain of hitting a poison-ivy patch with a weed eater, but I also wouldn't know the satisfaction of building a privacy fence for the first time.

I might not have an air conditioner that makes noises like a slamming door, but I also wouldn't be able to look at the front wall of the house and say: "See that? That's mine. I made that." If I'd been smarter then, I wouldn't know half the things I know now.

I may work every weekend the rest of my life (without pay), and I may see every other dollar going to Lowe's and Home Depot, but it's more than worth it.

I may be an idiot, but I'm a happy idiot, and I'd do it again in a heartbeat.

I would probably ask for an insulated attic as part of the deal, though. I'm an idiot, but I'm not stupid.