Cooking from the Soul 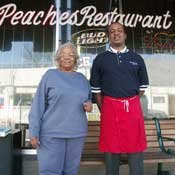 Wilora "Peaches" Ephram (left) and her son Roderick Ephram have made Peaches Restaurant a Jackson staple, but it hasn't always been easy. You can help them out.

When Wilora "Peaches" Ephram opened Peaches Restaurant in 1961, she had $45 in her pocket. She took that money and cooked hotdogs for her first customers until she made enough of a profit to start buying vegetables and meats to make the restaurant's famous soul-food plates.

The restaurant, located at 327 N. Farish St., is a crucial part of Jackson's history. During the civil rights era, Peaches fed the movement's leaders, many of whom had offices on Farish Street. In 2008, President Barack Obama stopped at Peaches while campaigning in Jackson.

Although Peaches is a simple restaurant that prides itself on treating customers like they are family, keeping its doors open for so long hasn't been easy.

On Thursday, Nov. 3, Wilora's son Roderick, who now manages the restaurant, talked about the business' challenges as he helped himself to a plate of fried chicken, yams and black-eyed peas.

When the Farish district began to deteriorate in the early 1980s, Wilora struggled to make ends meet. She began using her Social Security check to pay the bills. She refused to raise her prices for meals, and today, customers can purchase a plate lunch for only $6.

"She never thought about herself," Roderick Ephram said.

In 1996, Roderick took over the restaurant after Wilora suffered a heart attack. At 87 years old, she still comes by the restaurant most days to eat lunch and talk to customers.

"When I took over, the only amount of money she was able to transfer over to me was $150," Ephram said.

"But at least she had established a very positive name. It wasn't about the money. We have no business loans and no major equipment costs. For the last 10 years, we have been operating on the cash flow that we make day to day."

Ephram said his mother has dreamed of someday owning the property where the restaurant sits. The Jackson Redevelopment Authority owns it, and developer David Watkins sublets it to Peaches as part of the Farish Street Entertainment District.

Peaches had special meaning for the late Parlor Market Executive Chef Craig Noone, who died Oct. 14 in a car accident on Capitol Street. He would often come and make soul food with Roderick in the kitchen. Noone appreciated "cooking from the gut," which Roderick describes as using basic ingredients and elbow grease instead of machinery.

"He said this is how he was trained in culinary school," Roderick said of Noone. "He just took off with it, and said he wanted to do something for us."

In the weeks before his death, Noone was helping organize a pop-up restaurant at Peaches called PM Soul. The idea was that Parlor Market and Peaches staff members would come together to serve soul food and raise money for Peaches for one night. The event took on a greater sense of meaning after Craig died and is now scheduled for Nov. 14—marking the one-month anniversary of his death.

"Craig had so many ideas. He walked all behind the counter and in the kitchen, talking about ways we could modernize this place," Roderick said. "We have never had no one come down here and talk about doing a fundraiser, and we have been open 50 years."

Although the restaurant doesn't have a lot of kitchen equipment, Roderick said he'd like to purchase coolers so that he can also serve salads. Peaches also needs roof repairs and other renovations such as upgrading its booths. Watkins has also promised to do renovations when the second block of Farish Street Entertainment District comes online.

As Roderick talked about the future of Peaches, Watkins and his business partner Jason Goree emerged from a booth after finishing a lunch meeting.

"We are moving and progressing, and we are going to get there. They have been patient, and I'm sure they will be for a little while longer," Watkins said about Peaches.

Renovations and repairs aside, Roderick hopes that the fundraiser will bring together the community and draw attention to Farish's history.

"I think it will generate attention and, hopefully, it will bring people back and help them realize the importance of supporting Farish Street," he said.