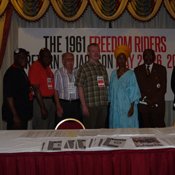 Freedom Riders gathered this morning to respond to Gov. Haley Barbour's apology for their mistreatment in 1961 and to also ask for a full pardon of the Scott sisters.

Several civil-rights activists and Freedom Riders gathered this morning, and called on Gov. Haley Barbour to put his apology into action and issue a full pardon for the Scott sisters.

This past Sunday, during the opening ceremony for the Freedom Riders' return to Jackson, Barbour made a public apology on behalf of the state.

"To the Freedom Riders yourselves, our state does celebrate and thank you for your courage, your commitment, your suffering and your sacrifices of 50 years ago. We apologize to you for your mistreatment in 1961, and we appreciate this chance for atonement and reconciliation," Barbour said.

"We appreciate his words," Brown said. "His graciousness deserved to be applauded, but this thing called racism is still in the DNA of this country."

Freedom Riders stood with members from the Committee For a Full Pardon for the Scott Sisters this morning to ask the governor to issue a full pardon for Jamie and Gladys Scott, who have been on probation since December 2010, when Barbour indefinitely suspended the sisters' life sentences for armed robbery.

Since their release from prison in January, the Scotts have had trouble finding work and housing because of their 1994 conviction.

Several Freedom Riders have signed and promoted a petition asking for a full pardon. They presented that petition with 130 signatures to the governor Monday, said Asinia Lukata, National Full Pardon Campaign Committee outreach director. The campaign has also collected another1,000 hand signatures and 1,127 online signatures. Lukata said the campaign expects to collect 30,000 signatures in total.

"The governor has been saying that he is interested in reconciliation, but reconciliation can't be a one-sided deal," Freedom Rider Robert Singleton said. "He apologized for what happened in 1961, but what about those things that he has full control of today? If we wanted to, he could intervene, and the Scott Sisters could be (fully) freed. ...What we were doing in 1961, still relates to today. It's not over."

Atmos, who lives in San Francisco, Calif., also called on the governor to reform the state's education, remove the current state flag and address disparities between blacks and whites.

"The Bible says you must show fruits of repentance," Atmos said. "You have to give some substance to an apology."

An even more powerful statement, in my opinion, took place this afternoon when Albert Sykes, director of the Young People's Project and protégé of Bob Moses, proclaimed to Gov. Barbour "I'm commin'!". He pledged to continue the struggle that the freedom Riders joined to help ensure that the Dream would be updated to understand the needs of young people all around the country, and especially in MS. With the eloquence reminiscent of a Stokley Carmichael and the sincerity of a Fannie Lou Hammer, he paid homage to Medgar Evers and Bob Moses by the leading the people there in a pledge to wake up and keep the struggle going. I'm hyped!!! Let's get it!!!!

Rev Brown's words were amazing and inspiring - so much energy from someone in his physical condition. Albert represents our future. He grew up with and through Bob Moses. He is the example of the best of our community and we have a good future individuals like him are the next generation of leaders. The one thing we "grey hairs" need to do is make sure that his generation and the ones who follow know of the work done for them 50 years ago so they respect and honor the sacrifices and build on that foundation.