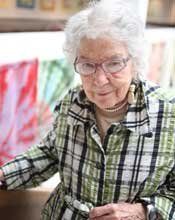 LaRita Smith is exhausted. Not only has she been painting until 3 a.m. and cutting countless strips of paper for collages with glue-covered hands, she's been doing it at age 87.

As Smith settles into her chair at the Arts Center of Mississippi, she looks around at the collection of her life's work and lets out a sigh.

"I'm just wiped out," she says. She's lived a lot of life in those years.

Smith was born in Piney Woods in a leap year, the oldest of nine children. She moved to Jackson at age 5, and it was while living here that she discovered her love of art.

"We lived in rented houses, and some of the wallpaper was ragged, and my mother always let me draw on the walls," Smith says.

"That's the key to my art career, because other people don't let their children draw on the walls, you know."

Her love of art strengthened when her schoolteachers recognized her talent and displayed her work.

Though she had some art education while attending Louisiana State University majoring in journalism, she says her real education came from traveling.

"Japan. That was my art education," Smith says.

She scoffs at the term "well-traveled." Although she's traveled to five of the seven continents, it has not been luxuriously.

"I travel so cheap. People get the idea that I'm really snazzy because I've been to all these places, but I went carrying my own suitcases ... (and) sleeping on the train," she says. "But I'd never do without it. I'd never give up seeing where I've been."

Smith was married to J.C. Mixon, who traveled for work, and she lived in Venezuela for six years until relocating to New Orleans in 1962.

A mother of three (Martha, Richard and Claude), Smith had numerous odd jobs in New Orleans, along with gallery exhibits, private showings and a booth on Jackson Square.

She moved back to Jackson in 1982 to take care of her ailing parents and has lived here since. She says her sister, Laura Levitt, who owns Madison Antiques, has been her greatest supporter and has financed her art endeavors for all these years.

Her love for Jackson is obvious when she reminisces about places in its past such as Livingston Park, which included a man-made swimming beach, golf course, castle-like buildings, dancing pavilions and a zoo. It is partially preserved at the Jackson Zoo, she says.

"It was a beehive of activity," the artist recalls.

The artist hopes her retrospective art show has captured her many life experiences and travels in its sketches, acrylic and watercolor paintings, multi-media works, collages and even a light show.

"I'm a living camera pen," she says. "I feel like I am a camera--a camera with a pen on it, rather than an artist."

LaRita Smith has asked us to give credit to her sister Laura Levitt, who has been her greatest supporter and has financed her art endeavors over the years.