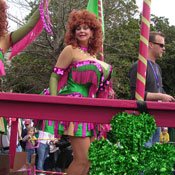 When the Sweet Potato Queens hit the streets, people take notice. Beware and lock up your men!

"Fondren is a well-oiled machine," says Boss Queen Jill Conner Browne, the original Sweet Potato Queen, of the place she chose to be the home of her upcoming Zippity Doo Dah Parade.

The parade takes its name from "Zip-a-Dee-Doo-Dah," the Academy Award-winning song from the 1946 Disney movie "Song of the South." The parade website describes the song as "a freedom song, about emancipation, that resonates on multiple levels with people who understand that Jill Conner Browne's books are not just funny." The site goes on to say the "bawdy, sassy, down-to-earth humor ... conveys a message of self-reliance and empowerment, inspiring all to do what makes their hearts sing." The bluebird logo of the parade is also a nod to the song's lyrics, "Mister Bluebird's on my shoulder, It's the truth, it's 'actch'll.' Everything is 'satisfactch'll.'"

The evening parade will provide an overload of amusement, but it's hard to top the entertainment of the main attraction: the Sweet Potato Queens and their "wannabees." The Sweet Potato Queens developed from Browne's wildly successful best-selling books and became a sensation, inspiring thousands of women to release their inner queens.

Each year the queens flock to the streets of Jackson in droves, representing 6,163 chapters of Sweet Potato Queens in 22 countries. This year, a chapter of 20 queens from Indonesia returns.

The queens might be the main attraction, but the real star of the parade is Fondren.

"This really is Fondren's parade, and so many people are helping to make this happen," Browne says.

The list of volunteers and people endlessly working to make the Zippity Doo Dah Weekend happen runs pages long, and every Fondren business and organization has pitched in, including the Fondren Association of Businesses, SoFo (the neighborhood ladies auxiliary) and the Fondren Renaissance Foundation.