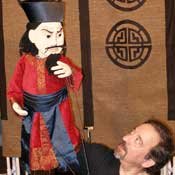 Peter Zapletal tours schools and libraries with his puppets.

The puppets Peter Zapletal makes are works of art, all unified by his craftsmanship. The sly smile on bunnies wearing striped suits in "Carnival of Animals" and the details in the construction of the robbers Fritz and Wolfgang that allows them to move in "The Breman Town Musicians" are just two examples of the way Zapletal uses art to bring stories to the stage.

Zapletal, 66, is artistic director for Puppet Arts Theatre and is one of the few working puppeteers in Mississippi. He uses the art of puppetry to enhance children's education throughout the state and the rest of the United States.

Puppet Arts Theatre is a touring puppet theater group, and is part of the Mississippi Puppetry Guild, an organization that unites all the puppet organizations in the state.

Zapletal's interest in puppets began during his youth in Gilina, Slovakia—a country at the center of modern puppetry. He attended the Academy for Performing Arts in Prague and graduated with a master's degree in puppetry.

Using his imagination is why Zapletal enjoys being a puppeteer.

"I like that you have the chance to create your own world where everything moves the way you want it," he says. "You get a chance to present this world to the children and their parents, and that plays up their imagination."

Zapletal's family immigrated to New York City in 1967, where he produced puppet shows and began to gain notoriety. He experienced a different puppetry culture than the state-sponsored artistic endeavors found in Slovakia.

"In America, each puppeteer is really different than the other. Many are looking to the classic stories or the new books for children (for inspiration)," he says. "There is a large variety of shows in American, but you still have much smaller companies than in Slovakia or the Czech Republic."

In 1971, Mississippi Public Broadcasting offered Zapletal a job as a puppeteer. His acceptance meant a move to Jackson, and the opportunity to use puppets as educational tools.

"At that time, the public television was all about education which meant working with the State Department of Education and producing programs for classroom use," Zapletal says. "We worked very closely with teachers, using their curriculum and produced a program that was eventually distributed nationwide."

Some of the educational shows Zapletal has helped develop include a show about China and many about music. A wide variety of shows also means Zapletal is responsible for the development of a multitude of puppets. Zapletal's puppets are unique to their show.

"We want to offer the students a different look at every show, so every design reflects the show other than one design being adapted for different shows," he says. "When you see our puppets you cannot tell, 'oh, that's from Mississippi Puppetry Guild,' but when you look at the Muppets you know it came from Muppets."

Zapletal has won numerous awards for his puppets and puppet shows, including one national Emmy and four regional Emmys for the television show "Ticktock Minutes" and the Puppeteers of America Award for high standards and continued excellence in puppetry. He is a past president of the Union Internationale de la Marionette and was the artistic coordinator for the 1980 World Puppetry Festival at the Kennedy Center in Washington, D.C.

Zapletal will offer a puppet-making class this summer through Millsaps Office of Continuing Education. For information, call 601-974-1130. For information about the Mississippi Puppetry Guild, visit http://www.mspuppetry.com.