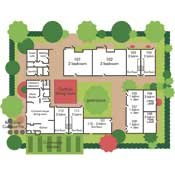 The decrease in the number of Americans participating in bowling leagues since 1950 is just one example of America's movement toward isolated communities. Robert Putnam uses this example in the book "Bowling Alone: The Collapse and Revival of American Community" (Simon and Schuster, 2001, $10.99) to demonstrate that American's decline in social activity is detrimental to a strong democratic society. Putman writes that modern technology such as the Internet and TV as well as the increase in working parents is to blame for a society in which neighbors and community members aren't engaging in face-to-face interactions.

Co-housing is perhaps one solution for establishing family-friendly and communal neighborhoods. While co-housing can take on a variety of forms, it's defined as collaborative housing in which residents participate in the design and operation of their own neighborhoods. In its purest form, a group of people purchase land together, agree on the architectural plans and participate in each stage of the development's formation.

Retrofitting existing buildings and creating homes around open shared spaced and common facilities are other co-housing options. Co-housing allows families to have private homes or townhouses but buildings are connected to common spaces such as courtyards and playgrounds. Co-housing can also include shared kitchens, dens pools, basketball courts and clubhouses, all within walking distance of a tenant's doorstep.

For the past two years, a group of about 20 Jackson residents have been planning their own co-housing community. In March, sisters Marie and Hilda Owen and various sponsors hosted "Intentionally Building Community," a three-day workshop with architects Charles Durrett and Katie McCamant, who brought the concept of co-housing to America in the 1980s after living in Denmark.

During the workshop, Owen and other residents looked at prospective sites to building their own co-housing community. She estimates that it will take about two years to build.

If you're thinking about building your own co-housing community, Owen offers some advice:

Form a Core Group
It's important to build a co-housing community with people you know and trust. Hold interest meetings and take the time to get to know the people. Owen says a lot of people were interested in the idea, but the group eventually narrowed to a about a dozen committed citizens who had the money and time to invest in the project.

Evaluate Your Commitment
Co-housing usually requires each tenant to purchase property and make a long-term commitment. Much like buying a home, owners are responsible for repairs and the overall day-to-day management of a property. Co-housing works best when the work is divided between its owners. If you aren't ready to make a long-term investment, consider similar forms of cohabitation such renting a house with roommates or sharing yards or common spaces with your existing neighbors.

Establish Community Rituals
Create rituals that will define and unite your community. Co-housing provides opportunities for neighbors to share common interests. In one co-housing community, Charles Durrett designed a common room specifically for dancing. Now each night after dinner, neighbors clear the room, bring up the lights and dance. Other events can include weekly potlucks, wine-tastings, holiday parties or welcoming ceremonies for new members.

Learn to Let Go
Learning how to make group decisions by consensus is vital to establishing a co-housing community. As residents work with architects to design plans they will have to collectively agree on amenities such as pools, the size of spaces and how much they are willing to share. In one co-housing community for seniors, the group could not afford to build an entire single-story development. Many seniors were worried about what would happen if they could no longer access stairs or had to recover from surgeries. The co-housing members formed an agreement that disabled seniors, or seniors prone to falls would have priority on the bottom level.

For more information, visit http://www.cohousing.org, the website of the Cohousing Association of the United States.