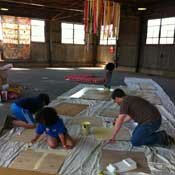 Volunteers help prepare The Plant on 80 for FIGMENT Jackson May 14-15. The former Coca-Cola bottling plant has been vacant since 2007.

As he flipped through a slideshow of a "Wizard of Oz"-inspired golf course, an outdoor living room made of grass and children jumping in a bed of flower petals, David Koren emphasized that FIGMENT is not an art exhibit, but a participatory arts event that has the potential to change Jackson's landscape.

In 2007, Koren founded FIGMENT and hosted the first major arts showcase on Governor's Island in New York. Similar to Nevada's Burning Man, FIGMENT has defined principles that set it apart from a typical arts festival or exhibit. FIGMENT does not involve any commerce, because putting a price tag on events ultimately limits participation. Admission is free, artists cannot sell their work, and corporate sponsors are not allowed. Other principles are inclusion, self-reliance, giving, communal effort, civic responsibility, leaving no trace, gratitude, immediacy and, most importantly, participation.

"We were looking to open up some opportunities and create a new kind of arts event that was open to anyone to participate in and to really build community," Koren says about the New York project.

This year, Detroit, Boston and Jackson will host FIGMENT events for the first time. The requirements for participating in FIGMENT are simple: If you have a creative idea, bring it. Artists can bring their own materials and set up shop, as long as they don't leave anything behind. FIGMENT is meant to be organic, spontaneous and inclusive.

In fall 2010 Whitney Grant learned about FIGMENT through an American Institute of Architects design competition listing she found. She fell in love with the idea.

"FIGMENT is like a potluck party for art," Grant says. "You can bring everything you need. It's about the experience."

As a research associate at the Jackson Community Design Center, an urban research laboratory at Mississippi State School of Architecture in downtown Jackson, Grant had recently helped design concept plans for The Plant on 80. The 143,000 square-foot factory served as the Coca-Cola Bottling Company on U.S. Highway 80 in south Jackson until it closed its doors in 2007.

Gil Sidi, an entrepreneur, bought the property in 2009 with plans for development.

Grant had big ideas for the space. She and other JCDC architects proposed the idea of turning the space into loft and studio spaces with amenities for artists. She envisioned it as a space that could host community events, grow community gardens and revitalize the U.S. 80 corridor.

Bringing Sidi and Koren together, Grant proposed hosting FIGMENT Jackson at the former plant. Koren initially had doubts about having FIGMENT at a site that would essentially benefit a real estate developer and counter the festival's principle of no commerce. But when Sidi invited Koren to visit Jackson to meet with the community, city department heads, arts organizations and other key players, Koren was impressed with what he saw.

"It was an actual project that there was a real need for in Jackson," Koren says. "I started to learn of the important role that the plant could play in bringing energy to a part of the city that really needed it.

"It became clear that it was not about creating a real-estate development that would bring profit to one investor. Sidi was really doing this for the right reasons."

In April, FIGMENT board members met with Melvin Priester Jr. at his family's law office on North Street. The majority of the board members are young professionals who might not have a lot of time or money, but have big ideas. They are busy tackling logistics of the event such as renting port-a-potties, organizing volunteers and fundraising. The Jackson group will pull off the entire event with $5,000 from private donations and a grant from the Greater Jackson Arts Council.

Examples of the projects include a water drums station, a life-size camera obscura, wearable sculptures and a 50-foot interactive model of the Pearl River.

One of the most elaborate pieces is the Samplotron, a Mobius sculpture made from reclaimed metal and wood. As people explore the space, they can press buttons to hear original music and song compilations. Priester collaborated with several local artists as well as artists from across the country on the project.

Since November, Grant and the board members have worked tirelessly to promote all things FIGMENT and rebrand the old cola plant. In January, more than 1,000 of people attended the Jackson Free Press Best of Jackson Party at the plant. Since then, local filmmakers have used to the space to film music videos, artist have painted murals, and the community has pitched in to make repairs.

Sidi said he hopes the energy FIGMENT Jackson brings will define how the community uses the plant.

FIGMENT can inspire people and communities to envision a better future. Koren says the first step to changing things is simply imagining them happening.

"(FIGMENT) is a great springboard for people who want to get in touch with their own creativity. It helps us, as individuals, in all kinds of ways--(by) being able to have that outlet, being able to access our imaginations and access that reality," Koren says.