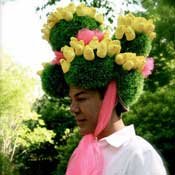 Like many little girls, I acquired a deep love of sequins, costumes, and song and dance around the age of 3. This love never diminished as I grew older. Thus, while I'm an otherwise normally functioning adult, I don't think twice about wearing sequined shorts just because it's Friday night and coming up with theme-party ideas and costumes for any occasion (or none at all). In my head, my life is a musical that includes theme songs and choreography at pivotal moments—which brings me to my brush with Broadway and a bedazzled boot.

It really started during Arts, Eats and Beats April 14 in Fondren. Rodale Hall and Randy McDonald of Silly Billy's, the new second-hand store in Duling School (if you haven't been, run, don't walk there), decided to go into party mode that night, '70s disco style. So when I walked in, not only were folks sporting fantastic Afros, but one person was wearing an equally fantastic sequined vest. Secretly coveting that vest, I browsed the store, leaving with a cute straw purse but nothing shiny.

Those sequins got me wanting more. Luckily, living in Jackson means access to the W. Kessler Ltd. "Best of Broadway" series at Thalia Mara Hall. Having been sufficiently thrown into a show-like mindset by the disco gear, I squealed with delight on finding myself with tickets to the production of "A Chorus Line." (Yes, I sang "I Hope I Get It" all week in preparation for the show.) Some fellow audience members were so excited that their wardrobe reflected it, too—like Shannon Grimsley, who donned a sparkly gold top for the occasion, an appropriate nod to the finale costumes, but not over-the-top.

A benefit of living and playing downtown is that the Broadway fabulousness didn't end there. The next night, while out and about after Downtown at Dusk, some friends and I encountered the show's cast eating dinner in street clothes after the show. The always-gregarious Claire Hawkins immediately went over to chat, and I quickly followed. Our chat may have devolved into an impromptu audition, including singing a rendition of "Dance, Ten, Looks, Three" (aka "T*ts and *ss"). But who could blame us? We were starstruck.

With so much music and glamour during the week, I couldn't let the weekend pass without enjoying a performance by our local queen of sequins and stage presence, Miss Sweetheart Jackie Bell. My friend Erin Kelly had joined me for the Broadway show and was up for some late-night blues that weekend, so Saturday night we wound up at F. Jones Corner. I've been a fan of Jackie Bell's for years and always enjoy her show. Because, let's be honest, anyone who can practically do a backbend while belting out "Toolbox" and wearing a jumpsuit deserves admiration for life.

And then there was Easter. Those of you who read this column already know about Eddie Outlaw and the William Wallace Mad Hatters. Eddie and Justin McPherson love a costume as much as I do, if not more—and Easter is a heck of a reason to get crafty. For the Easter bonnet party at JC's, they crafted masterpieces to wear on their heads that would make Alexander McQueen and Lady Gaga proud. We're talking sculptures out of plastic eggs and bunny ears, and a topiary of greenery and Peeps. I love it. That, dear readers, is how you do an Easter bonnet right.

And, in turn, it brings me to my newest sequin-related mission: Another friend, Todd Trussell, recently found himself gimping around in a boot due to a foot injury. This week convinced me it deserves some bling, Claire Huxtable style. If you see him out with a bedazzled boot, you'll know I succeeded.