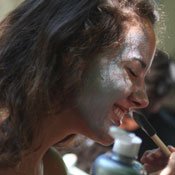 "Coma Boy" is one music video to catch at the Crossroads Film Festival this weekend.

The competition at this year's Crossroads' Regional Music Video Showcase will be fierce. Throughout the past year, local filmmakers and musicians have spent hours filming, editing and producing videos aiming to outdo other Crossroads' opponents and even their own work from last year.

Crossroads gives local and regional artists an outlet to showcase to their work, and the showcase is usually one of the most packed events at the festival.

Last year, Jackson filmmaker Robby Piantanida won Best Music Video for "After the Fall," by Taylor Hildebrand. This is the first year a panel of judges will select the best music video and the viewers' choice award. Audience members selected the winners in previous years.

While there are too many entries to mention them all, here is a sneak peak of some of the local videos you can expect to see this year:

"Coma Boy" by Jackson musician TTOCCS REKARP (pronounced tox rekarp), aka Daniel Guaqueta, is an upbeat and funky song using electronic cumbia, a Latin American rhythm. The video, produced by Amile Wilson and directed by Clay Hardwick, follows a hairdresser, a science-laboratory worker, a landscaper, an office worker and a pizza maker--all with familiar faces--through their daily routines at work.

The employees are all on the clock at their jobs. As the office worker stamps papers on his desk over and over again, and the pizza maker places yet another pepperoni on his pizza, they begin to lose it. The office worker's plain tie changes to cartoon characters while the hairdresser, played by SMoak Salon owner Suzanne Moak, begins to cut hair with garden shears. By the end of the video, the workers are splashing in a pool, while women decorated with body paint linger around the pool's edges.

The video is incredibly colorful and embodies a youthful rebellion that makes you want to get up from your desk chair and dance.

An animated love story between a dinosaur and a man might seem a bit abstract, but that is exactly what Jackson illustrator Justin Schultz had in mind when he created the music video for Spacewolf's "Mental Needles."

The song is about finding a person who makes life so interesting and full of adventures that it's as if they have stimulated your brain with needles.

Schultz, owner of illustration company The Flying Chair, spent 40 hours drawing the animation on his Wacom tablet and piecing the story together in Flash. The animation that follows the rock song is a fun and fast-paced ride in which a large, green dinosaur and his friend go from sightseeing in Paris to throwing TVs off balconies.

"I wanted people to watch it again," the 28-year-old Brandon native says. "I wanted it to be a full story from front to back, and I crammed that whole idea into 2.5 minutes."

"Mental Needles" is Schultz's first video but, hopefully, not his last.

Filmed in Edwards, Miss., "Cold Red Clay" takes a serious tone with its dark southern gothic storytelling. Jackson photographer Ron Blaylock shot the video for songwriter and musician Tommy Bryan Ledford who is releasing his solo album, "Butcher Bird," this spring. The video, which won Best Music Video at the Oxford Film festival last month, tells the haunting story of a man who may or may not have killed his pregnant wife.

Shot in black and white in an old cabin in the woods, the strong images evoke nostalgia and bring Ledford's folk-bluegrass song to life. Blaylock says that he wanted to tell a story in line with Ledford's upcoming murder-ballad album while creating a loose plot line.

"We didn't want to write it out too clearly, but leave it up for interpretation," Blaylock says. "We wanted something a little creepy."

The Crossroads Regional Music Video Showcase is at 7:15 p.m. Friday, April 1 on Screen A.