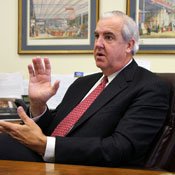 If Morgan Freeman is Clarksdale's most recognizable resident, Democratic gubernatorial candidate Bill Luckett may be its second. An attorney and developer, Luckett runs two of his high-profile business ventures with Freeman, the Ground Zero Blues Club and Madidi's Restaurant.

While his commitment to Clarksdale may have a long history, his legal residency there may be a more recent development. Luckett's eligibility to run has come under scrutiny with the release of documents suggesting that he has not been a legal resident of Mississippi for the five years state law requires.

The Associated Press reported March 11 that Luckett was registered to vote in Shelby County, Tenn., from 1996 to 2008 and had voted in Memphis as recently as Nov. 7, 2006. Luckett declined to answer AP's questions about where he files homestead exemptions.

On March 13, 2008, Luckett registered to vote in Coahoma County. He listed, as his dates of residency at his Clarksdale home, December 2007 to the present. Before then, his registration form shows, he claimed a residence in Memphis from January 2002 to December 2007.

Shelby County deleted Luckett from its voter rolls after his Mississippi registration.

"I have lived in Mississippi for over 61 years straight," Luckett said in a statement emailed to the Jackson Free Press.

"Over part of that time I owned multiple residences, including a place in Tennessee. I've had a Mississippi driver's license since I was 15 and have bought all my car tags here in Mississippi since my very first vehicle. I am a Mississippian, and my fellow Mississippians will choose their leaders, not political hacks playing games."

The state Democratic Executive Committee approved Luckett's qualifications and those of Hattiesburg Mayor Johnny Dupree March 12, allowing both to appear on the primary ballot.

State law allows challengers to a candidate's residency to submit a complaint to the relevant party's executive committee. The Democratic Executive Committee did not receive any such challenge, and the 10-day window for filing a challenge after the committee's decision has expired.

Dupree's campaign does not have plans to contest Luckett's qualifications.

"I think that's up to the Democratic Party's executive committee to decide whether or not he's on the ballot," said Sam Hall, campaign manager for Dupree. "As far as the mayor's concerned, as far as the campaign is concerned, our only focus is running for governor and talking about what the mayor has done as mayor and what he will do as governor."

On Monday, Hall released an additional statement saying in part, "it seems clear to us that there are serious questions about whether or not Mr. Luckett has lived in Mississippi for the constitutionally required five years." Nevertheless, Hall said, deciding Luckett's eligibility "remains an issue for the Mississippi Democratic Party and Mississippi voters."

Barring a decision by the executive committee not to place Luckett on the ballot after certifying him, both candidates will appear on ballots for the Aug. 2 primary. After the primary, the next opportunity for a challenge would be to file a complaint with the state Elections Commission, which is composed of the attorney general, governor and secretary of state. With two Republican members on the three-member commission, such a complaint would be an attractive tactic for Republicans hoping to eliminate a gubernatorial opponent.

Opponents could file a lawsuit challenging Luckett's eligibility. State law requires the governor to reside in Mississippi for five years preceding the election. That means Luckett would have to prove that he was a legal resident of Mississippi on or before Nov. 8, 2006.

The Mississippi Supreme Court has heard challenges to candidates' residency qualifications. Its rulings have not delineated a simple means of deciding residency status.

"The general rule in this state is that there is a rebuttable presumption that one's domicile and residence are where his homestead exemption is filed," Justice George Carlson wrote for the court in a 2007 case. "This court recently held that a potential candidate's decision to forego homestead exemption in the county of his apparent residence is not definitive for purposes of determining his legal residence. … This court has never held that a decision to forego homestead negates the otherwise obvious establishment of a domicile."