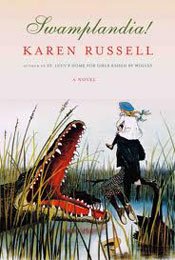 When I first picked up "Swamplandia!" (Knopf, 2011, $24.95), I was skeptical at best. As a Florida native, I was excited to read a book set in my home state, but a book about a 13-year-old girl who is an alligator wrestler with a self-described "falling" family sounds a bit sketchy. As intriguing as the concept is, I didn't know how author Karen Russell would be able to write it without being ridiculous.

But she did, and she did it well. "Swamplandia!" is Russell's debut novel and chronicles narrator Ava Bigtree's life on Swamplandia!, her parents' alligator-themed amusement park and island home in the swamps of southern Florida. The novel is an extension of her short story, "Ava Wrestles the Alligator," published in 2006.

"Swamplandia!" opens with an epigraph from Lewis Carroll's "Through the Looking-Glass," setting the stage for an otherworldly and somewhat mystical journey.

Themes of searching and escaping are present throughout the novel. In the first pages, readers are introduced to Ava's mother, Hilola Bigtree, who dives into a pool of alligators and swims to the other side unscathed. She's the headliner of Swamplandia's show and brings in flocks of tourists. After Hilola dies of ovarian cancer, and after competing theme park ,the World of Darkness, opens on the mainland, the Bigtree family begins to fall apart.

Ava thought the worst happened when her mother died. But she realizes "that one tragedy can beget another, and another—bright-eyed disasters flooding out of a death hole like bats out of a cave."

The protagonist's father, not-so-affectionately known as Chief, also ventures to the mainland to find capital to support renovations—the park's "Carnival Darwinism," as the Chief calls his vision of the Swamplandia's evolution.

Ava is left alone on Swamplandia, until the Bird Man comes to the island. After some persuasion, he takes her to the underworld so she can find Osceola, begin to repair her family and save Swamplandia.

Russell interweaves the multiple narratives of the Bigtrees throughout the novel. Russell's command of the English language will draw you into "Swamplandia!," making you feel like you're there with Ava.

The author's words had a grip on me that wouldn't let go.